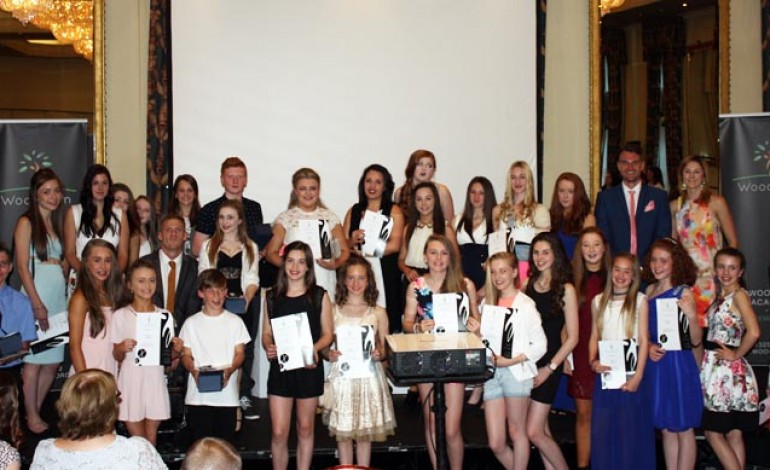 Woodham Academy sports stars were honoured with a string of awards during a special presentation at Hardwick Hall Hotel in Sedgefield.

The night is a celebration of students’ achievement and rewards their hard work and dedication. Paralympic athlete, Stephen Miller, was the keynote speaker.

He inspired every person in the room with his enthusiasm for sport and his determination to succeed. His speech was applauded with a standing ovation .

Woodham Sports Academy Individual Achievement Award
Winner: Ben Stephenson
Ben has enjoyed another successful year in the pool this year. He has represented the North East of England Water Polo squad in U14, 16 and 18 age groups and is the first player to have represented all three age groups. In the U14 tournament Ben was voted the most valuable player. As a result of his outstanding displays he has attended Great Britain training camps in Croatia and Spain. In August Ben will attend the National Water Polo academy in Somerset as part of the U14 GB squad.

Woodham Sports Academy Recognition of the Year Award
Winner: Hana Stephen
Hana is someone who consistently performs to the highest standard without any hesitation. She is a very quiet member of the Dance and Leadership Academy, but has a major influence of the others around her. Her leadership skills and qualities set her apart and she is a fantastic role model for the younger students. Hana not only impresses members of staff but students too, as she was handpicked to take part in the recent GCSE dance moderation, performing in a routine that went towards another student’s final GCSE grade. Hana is a key member of the leadership academy and assists Mrs Hall with the delivery of extra-curricular netball to KS3 students.

Woodham Sports Academy Team of the Year
Winner: Woodham Dance Academy
The Dance Academy has had a very successful year. They have showcased their talent at many different events including the second Dance Academy showcase evening at school. The Dance academy’s first performance of the year was at the school Christmas concert. In March however, the girls had the opportunity to go to perform at the Great Big Dance Off in Newcastle, where both teams qualified for the national finals in Birmingham. The Dance Academy performed at the Feet First Dance Showcase at the Gala theatre, which was a fantastic opportunity.

Woodham Sports Academy Young Sports Performer of the Year Award
Winner: Dylan Lewis
Dylan has improved significantly over the course of the season. His performances at the end of last season meant he was given an opportunity by Newcastle United to be a key component of their defence, having previously been recognised as a forward thinking player. Over the course of the season he has learned more about the defensive side of the game, improving discipline and developing his organisational and leadership skills to help players around him. Particular highlights included the Premier League Truce Cup, held in Ypres, Belgium in November. The tournament saw Newcastle play Southampton, Stoke, QPR, Liverpool, Leicester and Burnley. Dylan’s performances saw him named the Newcastle United player of the tournament and the Club rewarded him with a VIP invitation to the Premier League game at St James Park vs QPR. He was also selected to represent NUFC in the futsal tournament for u13s (as an u12) against Sao Paulo, Porto and Lyon. His performances over the season have been rewarded with the offer of a new 2 year contract at Newcastle. Off the field, he has been lucky enough to meet Paul Gascoigne and David Beckham.

Tony Blair Sports Foundation Leader of the Year Award
Winner: Keera West
Keera is someone who had embraced the Sports Academy since its development in 2012. She is a key member of both Dance and Gymnastics Academies and has taken a lead role this year in assisting Miss Minervini with the girls and boys’ Gymnastics Academies. Her help and knowledge has made her a fantastic role model for our younger students. Not only does she offer so much to Woodham Sports Academy, she gives up her time and volunteers at the British Red Cross and does so most weekends. She is going to be sorely missed at Woodham, however it is hoped that she will come back in and assist with the delivery of the gymnastics academy during her time at College. Keera has been a true inspiration throughout her involvement in Woodham Sports Academy. In recognition of the partnership with the Tony Blair Sports Foundation, Tony Blair himself delivered the citation for Keera.

Woodham Sports Academy Performer of the Year Award
Winner: Caitlin Roberts
Caitlin has been an integral member of the Dance Academy since it began 3 years ago. She has been actively involved in the choreography of many dances and has led several of the dance academy sessions. Caitlin encourages others and works well and often adds the finishing touches to add a bit of sparkle to their performances. Along with Victoria Archer, she choreographed the piece based on a dark fairy-tale which was the winning dance in the north east heat of the Great Big Dance Off. Several of the judges came down to congratulate the girls on their excellent choreography at the end of the event. Caitlin has also been selected to go to Camp Cody this year due to her commitment and dedication to working with younger students. Caitlin is a role model to younger students in the sports academy however she also motivates students on her own age. Caitlin has performed exceptionally throughout the year, especially at the Woodham Academy Dance Showcase, The Feet First Dance Showcase and Great Big Dance Off.

The Mark Bulman Award
Winner: Aaron Busby
This award is in memory of former student Mark Bulman. It recognises what he did for Woodham Sport and symbolizes everything students in the Sports Academy aspire to. Through hard work, resilience, a positive mind-set and fight you can achieve anything in life, no matter how hard it becomes. The winner of this award, Aaron Busby, epitomises everything the award stands for. During his time at Woodham Academy, Aaron has grasped every opportunity available and has done so with a smile and positive attitude.