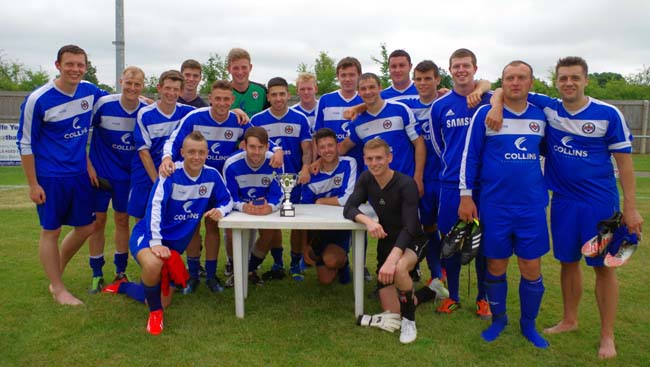 In a game set up in memory of the late club stalwart, Danny Earl’s second half hat-trick sealed victory on an emotional day for all involved.

Earlier goals from Dan Mellanby, Christian Selby and Fred Woodhouse had set Allan Oliver’s men on their way, and despite a late, quick-fire double from Graham Caygill and Colin Anderson, Aycliffe stood firm.

The Newtonians started well and it was former Darlington man Mellanby who gave the hosts an early lead with a typically cool finish following a lovely through ball from Earl.

The Division One side then doubled their advantage midway through the half when the Town defence afforded Selby too much time and space on the edge of the penalty area and he curled a delightful shot into the top left hand corner of the net from 20 yards.

Pete Mulcaster’s side worked hard to get back in the match with Anderson and Darren Kokes both going close, but had it not been for the outstanding form of ‘keeper Dean Hudson, Aycliffe would have been out of sight by the break. Twice he denied Mellanby while also performing heroics to keep out efforts from Earl and Tom Hutchinson.

But Aycliffe did add a third in the final minute of the first half. Stuart Owen got clear down the Town right and his low cross was turned home by Woodhouse from close range.

Town came out with more tempo to their play at the start of the second half with Anderson and Kokes both threatening but any hope of a comeback appeared over just prior to the hour-mark.

Stephen Gibson pulled the back from the right and Earl was on hand to make it 4-0 with a goal his all round performance had deserved.

What followed was a plethora of substitutions from both sides which disrupted the flow of the game but it was the hosts who added a fifth, fifteen minutes from time. Hudson did well to save at the feet at Mellanby but in doing so, felled the veteran forward, and the referee pointed to the spot.

Earl confidently stroked the kick past the Town goalkeeper to record his second goal of the afternoon.

Mulcaster’s side refused to let their heads drop and scored twice in 45 seconds. Substitute Caygill, who had only just replaced Kokes, fired home from six yards after fellow replacement Danny McLachlan had twice been denied by replacement Aycliffe goalkeeper Ryan Farley.

Then, straight from the restart, Gav Parkin whipped in a free kick from the right and Anderson arrived to glance a header into the bottom left-hand corner of the net.

An incredible comeback suddenly looked on the cards but the hosts weathered the storm and broke out to add a sixth, five minutes from time – Earl the quickest to react to a loose ball in midfield before expertly lobbing Hudson from 25 yards to claim his hat-trick.