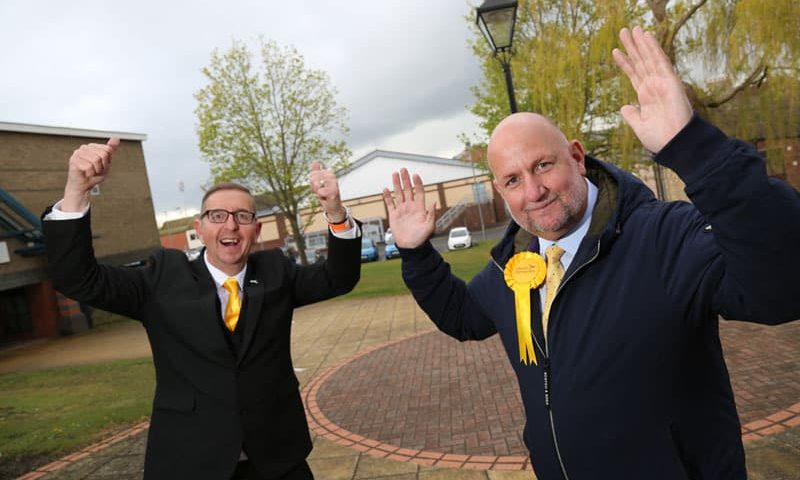 The pair stormed to comfortable victories in their Aycliffe wards, with both taking seats from Labour.

The nearest to him was Labour candidate Jim Atkinson, who retained the seat he won four years ago with 556 votes.

Labour had hoped Wendy Hilary could have retained Labour’s other seat in the ward previously held by Sarah Iveson, but she finished fifth in the poll behind Conservative and Lib Dem candidates.

“This is just the start, I have plans and I want to make a real change.

“I’m passionate about Aycliffe, I’ve lived there all my life, and I just wanted the opportunity to make a difference, so I’m absolutely thrilled.

“But it isn’t just about me. I’ve had so much help. My family especially, my kids helping me deliver leaflets, the Lib Dem party have been amazing. Too many to mention but I thank them all for a great team effort.”

In the Aycliffe North and Middridge ward, declared earlier on Friday, Stead – with 1,130 votes – finished second to Tory candidate David Sutton-Lloyd, who polled 1,269.

With Tony Stubbs from the Tories getting 905 votes – and his party retaining their two seats in the ward – Stead effectively took John Clare’s seat from Labour.

“I’m absolutely over the moon,” said Stead, who was elected to Aycliffe Town Council in a 2020 by-election.

“We’ve put a lot of hard work in that seems to have paid off.

“The turn-out was a lot higher, so I’m over the moon the people of Aycliffe North, Woodham and Middridge understand what we’re trying to do.

“I’m passionate about the simple stuff – litter picking, dog fouling bringing rats on to the town. And the bigger stuff like we have a school with portacabins, lots of things need happening and questions need to be asked on every level, and I’m looking forward to doing that.”