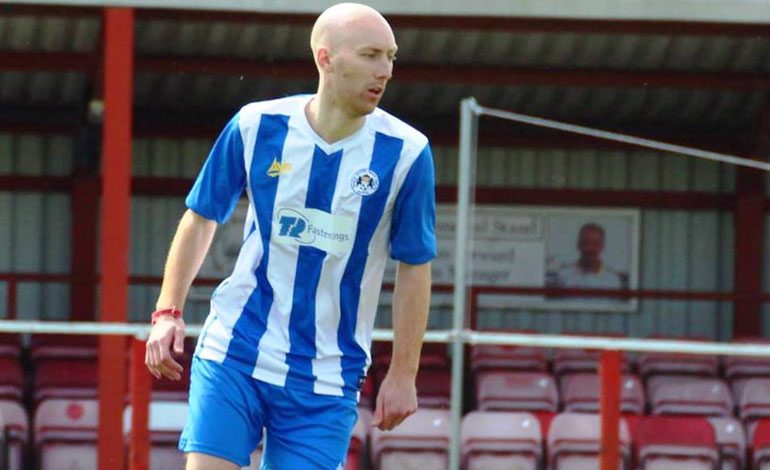 Again playing away from home, the Aycliffe side wasted no time in taking the lead with Callum Farley slotting home after a cross from the right hand side found its way through to him on five minutes.

That lead was quickly doubled when leading goal scorer Kyle Allen rounded the keeper on 10 minutes to make it 2-0.

It was Jimmy Cameron who chipped in next to make it 3-0 on the 15-minute mark – a long ball forward was flicked on from Allen to allow Cameron to smash home the third.

Ollie Gell (pictured above) then made it 4-0 after Ryan Stonehouse threaded a lovely ball out wide to the left midfielder who took the ball in his stride and netted his first of the season.

Then, with 10 minutes of the first half still remaining, Kyle Allen got his second, lobbing the out coming goalkeeper to make it 5-0 going into the break.

The home side managed to get a goal back as the second half kicked off, with returning goalkeeper Andy Hartley lobbed from 35 yards.

A scrappy 10 minutes followed with neither side really causing the goalkeepers any trouble.

On the hour mark though, Cameron linked up well with Allen, his cross finding the centre forward to claim his second hat-trick of the season, making it 6-1 to the visitors.

Allen was in amongst it again, getting his fourth on the 65th-minute mark, latching onto a clever through ball before rounding the keeper to slot home.

Allen then wrapped up the game with the eighth goal in the 85th minute, Gell’s through ball found substitute David Teder who’s cross found Allen to drill home.

There was still time for the home side to get a penalty after keeper Hartley fouled the home team’s centre forward but made amends by saving the resulting kick, diving low to his left.

Next up is the County Cup Tie, away to Coxhoe Red Lion on Sunday September 17.