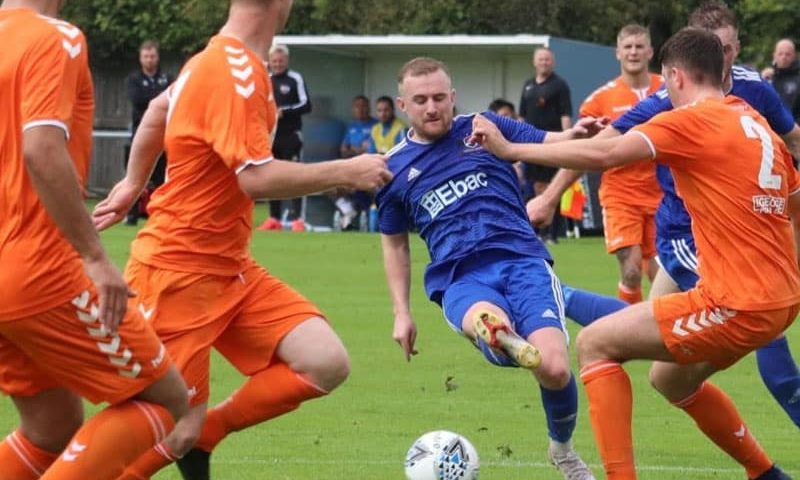 Newton Aycliffe FC pulled off only their fourth extra preliminary round win in 11 seasons in the Emirates FA Cup on Saturday with a narrow victory over Thornaby.

Aycliffe edged the seven goal thriller to earn a trip to Tadcaster Albion on August 21.

The game got off to a lively start with Liam Jarvie having the ball in the net after just 3 minutes. Unfortunately, an offside flag denied the home side the early goal.

The opener came on 21 minutes. Aycliffe took the lead when Sonni Coleman converted a penalty.

Thornaby responded a few minutes later with a fine strike from the edge of the box beating Adam Pickford in the Aycliffe goal.

Ten minutes later the visitors took the lead as Beddow scored from the penalty spot.

As the first half moved into added time Liam Jarvie equalised for Aycliffe, diving to head home a good cross from Ben Dibb-Fuller. Jarvie still wasn’t finished for the half and three minutes into added time he got his second meeting a cross from Joe Ferguson.

Aycliffe started the second half as they finished the first with a fourth goal on 49 minutes. Left-back Lewis Walton swung a cross into the box which was met by Sonni Coleman who headed past the keeper before he could react.

Just before the hour Thornaby pulled a goal back with a great strike into the top corner of the net and shortly afterwards could have levelled but for a fine save from Pickford.

Thornaby had a player sent off with about 20 minutes to go and Aycliffe had a couple more good efforts saved.

But there were no further goals and the game finished a 4-3 win for the Newtonians.

In the Ebac Northern League, after just two games Aycliffe are one of only three sides on 100% and they play the other two this week.

Newcastle Benfield make the trip to the Beaumont Landscapes Stadium on Tuesday (August 10, 7.45pm) while Aycliffe travel to Consett on Saturday, August 14.