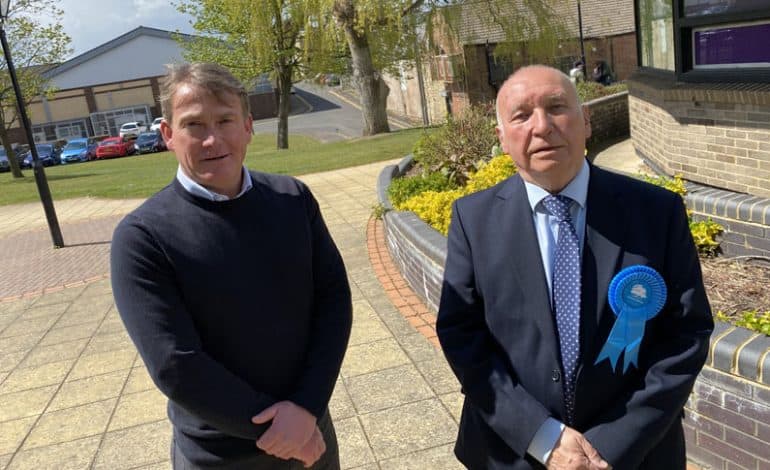 The Aycliffe candidate who polled the most individual votes in last week’s county council elections insists now is a time to put class wars behind us and encourage partnership working at grass roots level.

Second to him was Lib Dem candidate Michael Stead with 1,130 votes and the Tory party’s Tony Stubbs (above, left), who pipped Labour’s John Clare to third spot by just 82 votes.

There was a seismic shift away from Labour last week, with their Aycliffe representation on Durham County Council falling from five to two, while they lost overall power of Durham Council for the first time in more than a hundred years.

Scroll down to see all three Aycliffe ward results

Cllr Sutton-Lloyd – well known on the town for his defibrillator campaign – put it down to “changing attitudes”.

He Aycliffe Today: “The old class wars should surely be behind us now? Especially when you consider the awful year we’ve had.

“This is a time to forget things and move forward as a community, and I think a lot of people have recognised that.

“I’ve been passionate about community partnership work during all the time I’ve been involved in the community, because that’s what works.

“I’m looking forward to living up to our promise of partnership working, because that’s the only way we can go forward.

“I’d like to see more funding coming to the smaller groups, because it’s the people on the ground who know what needs to be done.

“We should make the county and the government live up to their promises, and that’s how I see my role as.”

Cllr Stubbs told us: “It’s something I’ve wanted to do for a while, and I couldn’t think of a better area to be doing it in.

“When I’ve spoken to people, residents have been really keen on just seeing a change. The county council has been Labour-run for over a hundred years, and people still have complaints, and I’m hoping I can bring about that change, to the area and to the council.”

And asked about Labour’s capitulation in the county council elections, Cllr Stubbs added: “A lot of people have got Conservative values.

“Maybe they haven’t had the confidence to express that opinion. It doesn’t mean we’re unfair, or uncaring.

“We value community, we value aspirational ideas. We all want change and a better lives for our communities and our friends.”