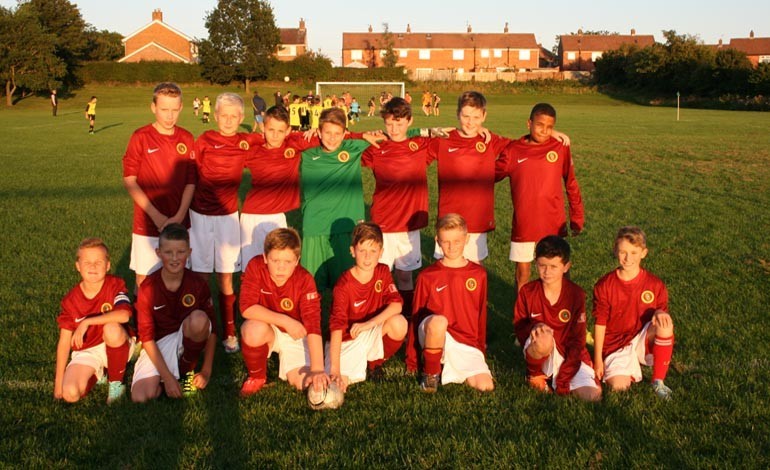 Newton Aycliffe Juniors football season continued with some exciting games and hard fought victories over the course of the weekend.

The Under 8’s were up against Barnard Castle Hurricanes and managed to gain a notable win. Playing some excellent passing football they scored eight goals with no reply, Harvey scored four, Rhys got a hat-trick and Connor got one. Defensively Aidan was solid and Lucas kept a great clean sheet. The second game was another goal fest as the Aycliffe team won 9-3, Jayden, Emrehan and Jack were the creators for Jacob getting four, Niall a hat trick and Jake two. Men of the match were Harvey and Niall.

The Under 9’s had a local derby playing at home against Newton Aycliffe Youth. The Juniors started slowly and gave their opponents lots of possession resulting in an early goal for the Youth team. A second half penalty was converted by Reece to equalise for the Juniors who by now were dominating the game. A good passing move was then finished by Lewis, giving the home team a 2-1 lead. Then a couple of minutes from time the visitors got an unlikely equaliser and the game ended in a 2-2 draw. It was a good all round performance from the Juniors with Thomas picking up the man of the match award.

The Under 10 TJFA side travelled to face Norton and Stockton Ancients and came back with all the league points after a 5-0 win. Another clean sheet for Thomas and goals from Lucas (two), Jacob, Jake via the penalty spot and a stunner from Aaron sealed the win. The second game saw more goals and a second clean sheet as Zack got the first and Lucas added four more with Thomas on target twice in a 7-0 win.

The Under 10 Russell Foster team continued their winning run with a 2-0 win over a determined Washington Juniors. Sam, Evan and Bo were all denied before the break. Sam then hit a low drive past the Washington keeper whilst Herbie kept the opposition at bay with a fine display in the Aycliffe goal. Noah, Bronton and Evan all hit the woodwork before the final goal was added. Player’s man of the match was Herbie and the parent’s award went to Evan.

The Under 11’s were involved in a great game at Sunnydale against Cleveland Juniors with both sides contributing some entertaining football. It was going to be a tough morning with the regular goal keeper unavailable but two Charlie Cayless strikes secured a 2-2 draw.

The Under 12’s (pictured above) were up against Shildon and started nervously in the absence of their two recognised goal keepers. They soon settled and Dylan Howe finished a strong run to get the first goal. Dylan then added another from the half way line in the second half before Adam scored two goals to seal a 4-0 win. Big thanks to Jermain and Dylan Scotchbrook who shared the goal keeping duties in the absence of the usual keepers.

The Under 14’s headed to Cargo Fleet Juniors, they had a difficult first half and got to the interval 2-0 down. Dawson came in to the defence and was strong in the challenge to aid the visitors cause. Hynes managed a cool finish to half the deficit then when pushing for the equaliser a third goal was conceded. Hynes went on to add his second and bring the game back to 3-2. The effort in searching for the equaliser was epitomised by man of the match Jayden but the goal didn’t come and the game finished in a 3-2 loss.

The Juniors were guaranteed a good result as our two Under 18 teams, Reds and Blacks, faced each other. Honest John’s community fund had very kindly supported the purchase of a new away strip for the Blacks which they proudly wore for this fixture (as pictured). The club came together in great spirit and the Blacks won a closely fought game 3-2. Reds goals came from Morghan Claydon and their man of the match Lochie Scott.

The under 23’s travelled to face South Shields Simonside in a Durham FA cup fixture. The first half ended 0-0 after Aycliffe missed a few good opportunities but their hosts were down to 10 men after a dangerous tackle on Jack Slatcher resulted in a straight red card. Aycliffe dominated possession but could not get the opener and unfortunately conceded a penalty to go behind. Their hard work was rewarded though when man of the match Michael Howe finished off a Colman through ball at the near post, the game ending 1-1.