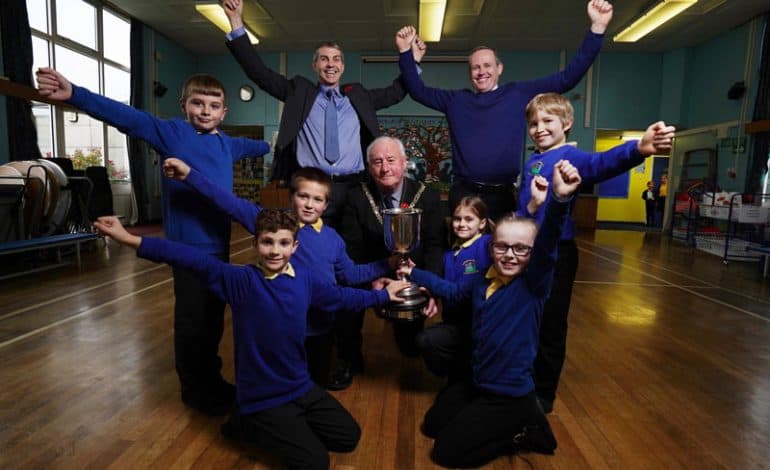 Gilesgate Primary School in Durham held a special assembly to celebrate its success as Best Overall Entry in the Beautiful Durham gardening competition, while it was also awarded Best Educational Group Project in the same awards.

The Beautiful Durham competition is organised by Durham County Council as part of and in support of the Durham in Bloom campaign.

The competition, which has been running for the past 36 years, encourages floral displays and environmental improvements in the Durham City area. It is open to individuals, groups and associations who are invited to apply in many different categories.

Pupils at Gilesgate Primary School have undertaken environmental improvement works in their neighbourhood, such as bulb planting, and assist the council with the planting of a carpet bed flower display off Gilesgate roundabout every June.

Only recently, when a film crew on behalf of the Royal Horticultural Society (RHS) visited Durham as part of the Community Awards 2021, the school, which is a Durham in Bloom group partner, was able to assist with the filming of the school allotment. This has resulted in various clips being used in the video montages of the various categories on the RHS website.

“The judges were really impressed with the pupils’ gardening knowledge and enthusiasm. Through their own efforts, they have not only been recognised locally but also regionally and nationally through Northumbria in Bloom and Britain in Bloom.

“We value the school’s participation and support and long may it continue.”

Mr Turner said: “The children of Gilesgate Primary School have supported Beautiful Durham and entered their school allotment into the competition each year since 2014. We are very proud to enter part each year and honoured to be overall winner in 2021.

“The allotment has developed and improved over this time with the help of the children, parents and community volunteers. The children grow from seed then use their produce in cooking, or we sell it to buy the seed for the following year. We gather and store water on site, make our own compost and encourage pollinators through the careful choice of plants.”