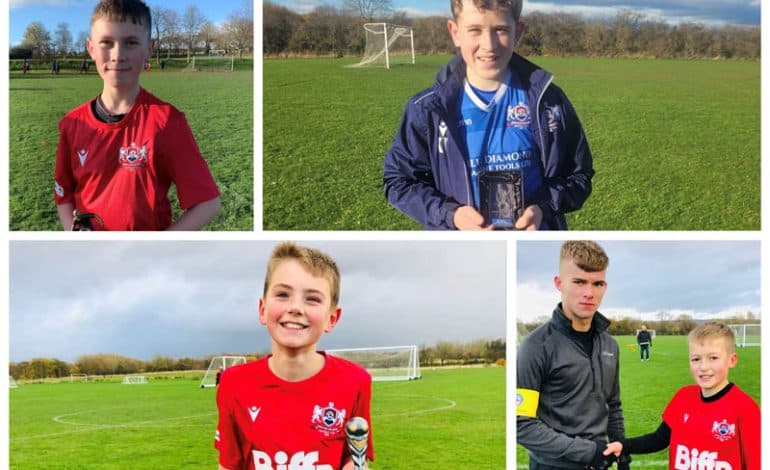 Under 9’s Blacks travelled to play Prissick Rovers. In a very tough game for the boys, they managed to score a wonderful free kick through Fin. The lads battled hard but ended up losing to a very good team. MOTM Luca with a fantastic penalty save.

Under 10’s Blacks had an early kick off v Waldridge. The team showed great energy with goals from Lucas 2 and Rhys, giving the lads a great win. A competitive game ensued, with great football being played by both sides. MOTM Lucas with two goals and Ashton for his defensive work.

Under 10’s Juniors travelled to Stockton Town Blues for a cup tie. A very flat first half, saw the lads trailing at half time. A much improved second half seen a lovely goal scored by Jonah. The team continued to press, for an equaliser but could not grab any further goals. MOTM Tyler.

Under 12’s travelled to Kader FC and come away with a fine 6-0 win in James first game as captain. In a great first half Callum give the team a 2-0 lead, with assists from Oliver and Zeke. Oliver made it 3-0 before Callum completed his hat-trick. Further goals from James & Faye rounded up the scoring. MOTM Callum.

Under 13’s whites made the short trip to Ferryhill, looking to continue their recent good form. An impressive performance saw Aycliffe lead 5-0 at half-time with goals coming from a Ferryhill OG, a direct corner from Ethan, Noah 2 & Oliver. A scrappy second half ended 5-2 to Aycliffe. MOTM Noah

Under 13’s Blacks had a tough game against Durham Tigers. The team started sluggish but found their feet with two goals from Danny. Durham pulled a goal back, but it was not enough with Aycliffe winning 2-1. MOTM Keaton

Under 15’s entertained Stockton Town at Woodham academy. In a tough first half, Jordan gave the lads a lead before Stockton equalised before the break. A second goal for the visitors, was cancelled out when Travis equalised. Recent new signing Matty grabbed the winner late on, 3-2 to Aycliffe.

Under 16’s travelled to Waldridge and were disappointed to find themselves 1-0 down, against the run of play. The lads created numerous chances, with Anthony, Taylor, Lewis & Liam going close, but could not find the equaliser, with the lads losing 1-0. MOTM Ted.