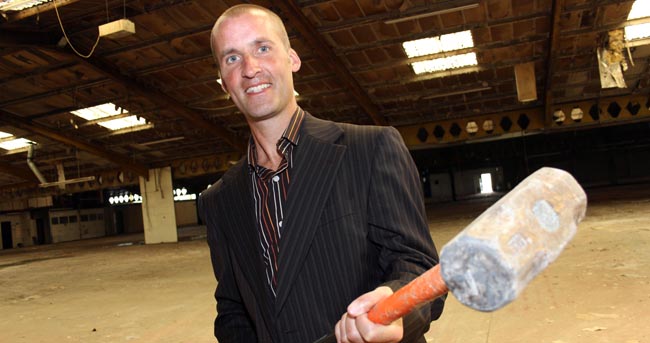 Work has started on an exciting £1.5m football facility which will provide seven state-of-the-art indoor pitches in Newton Aycliffe.

It’s now hoped the Soccer Factory, on the site of the old Thrislington Partitions building on Aycliffe Business Park, will be open for business later this year.

The new landlords of the unit have invested a significant amount of cash to enable the project to start after a series of frustrating delays.

The Soccer Factory, which was originally given planning consent in February 2012, will provide seven 3g five-a-side courts, as well as a brand new health and fitness suite, multipurpose studio, a café/ bar and a sports injury clinic.

It promises to bring 15 new jobs to the town, and along with other leisure facilities on the Business Park ensure Aycliffe becomes a popular destination for people from the whole of the South West Durham area, as well as further afield.

Managing director Dan Lewis has been the driving force behind the ambitious plans which have had their fair share of setbacks.

But he’s delighted that the first of a three-phase refurbishment programme is now under way, with the stripping out of the old run-down unit already well into its six-week schedule.

“It’s massively exciting for us,” he said. “It’s relief… it’s everything. It’s something we’ve been working very hard to achieve over the last year or so, and this is the start for us now.

CLICK HERE TO SEE OUR VIDEO FEATURE WITH MR LEWIS

“The men are now on site starting the refurbishment – it’s a day we’ve all been waiting for, for quite a long time.

“We’ve had some exciting negotiations over recent weeks with the new landlords who have invested a pretty significant sum into the project, so this is the start of the project now and we’re delighted to be here.”

Mr Lewis says he expects the whole refurbishment project to take 16-20 weeks, meaning it should be open before Christmas.

“It’s been a dream of mine for a long time to see this come to fruition,” added Mr Lewis.

“It’s hugely exciting and something we think will be very popular – something for people and the business community to buy in to – and we strongly feel this will be a great development for Newton Aycliffe and the surrounding area.

“We’ve worked very, very hard to get to here. I can’t wait, and hopefully the people of Aycliffe can’t wait either.”

Mr Lewis has been frustrated by a number of set-backs since planning permission was unanimously granted by Durham County councillors 16 months ago.

He explained: “A huge project like this involves a significant amount of money, and it’s not an easy time for people financially.

“There’s been a lot of people very excited about the prospect, although admittedly there’s been one or two frustrations when it’s come to the point of exchanging contracts, but now we’re where we need to be, and it’s very exciting.”