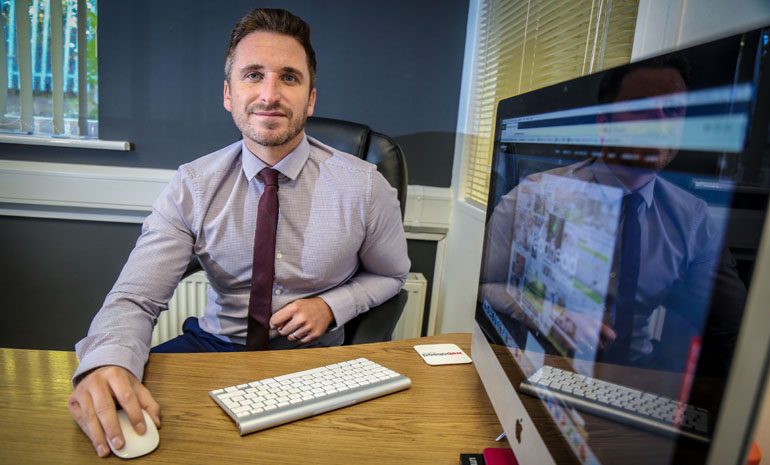 A fast-growing web design agency plans to expand and take on more staff with sales set to hit £1m for the first time.

After achieving a first-year turnover of £140,000, the firm now employs 22 people – made up of a sales team, administration staff, graphic designers and web developers – and boasts a client base of 5,000 customers across the UK.

Webahead – which is ranked third in the UK from 3,500 design agencies registered with the UK Web Design Association (UKWDA) – now expects sales in its current year, ending March 2019, to surpass the £1m mark.

And former Woodham Academy student Jeffries is eying further expansion with more staff and office space at its Faverdale premises in Darlington.

“We started the company with five of us and not a penny in the bank and not one client on our books,” says 33-year-old Jeffries, who started his sales career more than 14 years ago.

“By the end of our first day we had seven customers, and we’ve grown from there. We now have 5,000 clients across the UK and Northern Ireland and they literally range from one-man-bands up to large public and private organisations, including schools, colleges and charities.

“There are some web companies out there who won’t consider you unless you have £3-4,000 to spend. We’re not bothered about that, we don’t turn away our bread-and-butter, which is tradesmen.

“We cater for everyone. We have customers who spend £150 a year with us, to those bigger clients spending up to £30,000.

“The big sales do come, and they come quite regularly, but the more customers you have, the more word-of-mouth you get. Many of our clients will start off small and grow, so if we look after them and treat them properly from the beginning they’ll stay with us.”

Jeffries says he tried a number of jobs before eventually finding his “forte” in sales and then setting up his own agency.

“I tried being a postman which didn’t work out, then various office and factory jobs,” he says.

“But I was given an opportunity to work in sales. I really found my forte and eventually got into media sales, selling websites, and it has gone from there. I now have 14 years’ experience in media sales.”

Jeffries says it wasn’t all plain-sailing when he initially set up the company, but he has plans of growing the business further.

“It was the most stressful thing I’ve ever done,” he says. “In the early years I was in at 8am and not leaving home until 9 at night.

“And I had to wear many hats. I had to be a salesperson, a receptionist, I had to process all the sales, all the artwork packs for customers. It was a massive work-load.

“I was used to a decent wage by this point and I had to half my income to make it work, so it wasn’t easy in the early days.

“But it eventually paid off. We now have managers for every department and we have a really strong team, with everyone performing well.

“I pride myself on people management – I wouldn’t ask someone to do something I wouldn’t be comfortable doing myself, and I always speak to people in the way I expect to be spoken to. As a result we have excellent retention rates among both staff as well as our customer base.

“We’re now aiming to grow and expand into more office space and create more managerial roles for our staff.”