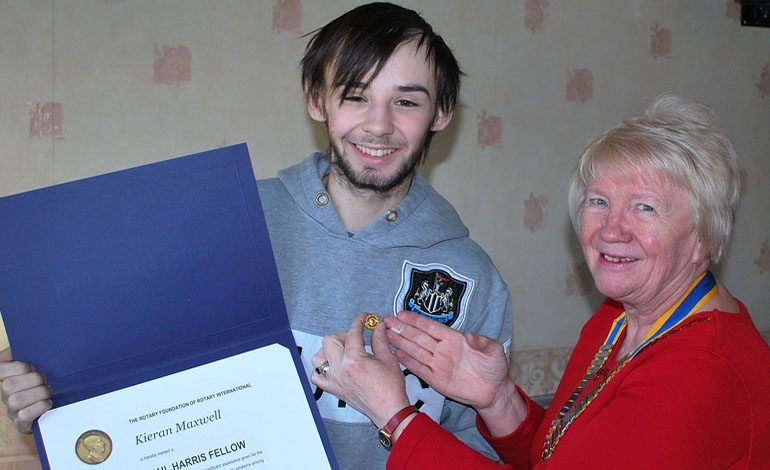 Inspirational teenager Kieran Maxwell, whose long and brave battle against a rare form of bone cancer touched the hearts of people throughout the UK when his story was reported in the national press, on radio and television, has been awarded Rotary International’s highest honour, a Paul Harris Fellowship.

Eighteen-year-old Kieran was presented with his much-coveted award at his Heighington home by Newton Aycliffe Rotary Club President Nora Scott.

She told him: “You have been an inspiration to many people who are battling life-limiting illnesses. We are all very proud of you.”

Kieran lost his left leg to cancer in March 2011 after being diagnosed with Ewing’s sarcoma, a rare form of bone cancer.

The following year, he carried the Olympic torch through Bishop Auckland and in May, 2013, he won Gold at British Gymnastics NDP Acro Championships after learning eight days previously that his cancer had returned to his lungs (he had eight new tumours).

His highest achievement was in December, 2015, when he won a gold medal in the 100 metres sprint at the Brazilian School Paralympics.

But, at a routine check-up last October, Kieran learned that his cancer had returned and was terminal.

His oncology friends rallied round and raised enough money to bring Christmas forward for the family.

When they heard this, the villagers of Heighington decided to make the village as Christmassy as possible by putting up their lights early so that Kieran could have a taste of the festive season.

“I couldn’t believe it”, said Kieran. “I was speechless when I heard what local people, some of whom I didn’t even know, had done for me.”

Throughout his illness, Kieran has been very active in a campaign in his name to raise money to enable a specialist to undertake research into Ewing’s sarcoma. The fund now stands at around £11,000.

Anyone wishing to donate to the Kieran Maxwell Legacy can do so by clicking here.