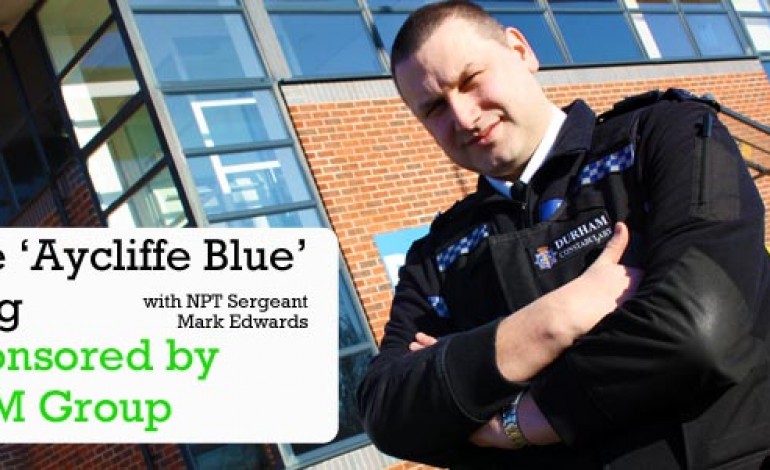 Well, I’m back after what seems like a lengthy absence. After bringing myself back up-to-speed with the latest happenings in the town it’s now business as usual!

Firstly, what’s new with the team itself?

PCs Grace Holohan and Kathryn Pudney have well and truly immersed themselves in their new beat areas – namely West Ward and Greenfields and Middridge.

For those residents of these areas who have yet to meet their new dedicated Officers I would recommend you come along to your next PACT meetings and say hello.

Details of our PACT forums can be found on the Durham Constabulary website or on our team Facebook page.

We also have a brand new PCSO joining our numbers in a couple of weeks time – Michael Hutchinson.

And I am happy to report that our former Greenfields PCSO Michael Welch will be returning to us in a few months time as a Police Constable once his initial training period is out of the way.

There are constant developments and I will provide relevant updates as they occur. Watch this space!

There have been a spate of burglaries in the town this past week.

Between 2 and 3pm on Wednesday (27th February) suspects have attempted to force entry into a house on Van Mildert Road – as a result a window pane was completely shattered before the person/s responsible have fled the scene.

Between 8am and 4pm the same day a house on Hylton Close was broken into where items were stolen from within. Amongst the items stolen were a DELL laptop and ACER laptop, both valued at around £700. A number of watches were also taken.

I would appeal to anyone who has information about these crimes to make contact with myself or my team at Newton Aycliffe.

It may be that you witnessed someone looking out of place in those areas on Wednesday but thought nothing further of it at the time.

Perhaps you know of someone who has similar described items that they are trying to sell. Again, if you have any information – no matter how small, please get in touch.

It’s time for some court results. The naming of persons convicted of offences is a topical one and has caused much controversy on the team’s social media sites.

Whether you agree or not these details are in the public domain and my team will continue to follow this process.

So, having said that…

Jason Brannigan, from the town, appeared at Newton Aycliffe Magistrates Court on 22nd February and was convicted of assault. He received a 26-week period of imprisonment suspended for 12 months. He was also sentenced to a community order meaning that he will have to be supervised by the Probation Service for a specified period.

Vicky Jones, 34, from the town, was convicted of a public order offence at Darlington Magistrates Court on 20th February for an offence committed in Newton Aycliffe. She was conditionally discharged for six months and ordered to pay a victim surcharge of £15.

Lynne Michelle Pogson, 40, from Aycliffe, was convicted of breaching the conditions of an anti-social behaviour order that she is subject of and was fined £70 as well as having a requirement to pay £45 costs to the Crown Prosecution Service and to pay a £20 victim surcharge.

Kathleen Mary Kirby, 61, from the town, was convicted of allowing a dog to be dangerously out of control in a public place at the town’s Magistrates Court. She was fined £110, ordered to pay £30 compensation and £85 costs to the CPS. She was also made subject of a dog control order and ordered to have the dog in question – a Staffordshire Cross, neutered.

Billy Jo Wallis, 35, from Darlington, was convicted at Durham Crown Court in relation to a burglary committed at an address in Carileph Close, Newton Aycliffe. He was sentenced to 12-month imprisonment.

We have been criticised in the past for not going to the same efforts to highlight where persons have been found NOT guilty at court.

So on that note I would like to report that Irene Hewitson and Jenna Eastland, both of the town, were found not guilty or having a case to answer following trial on 14th and 15th February, in relation to harassment stemming from issues in Rowan Place, Newton Aycliffe.

I will leave it there for now rather than run the risk of information overload.

Until next time, and as always…