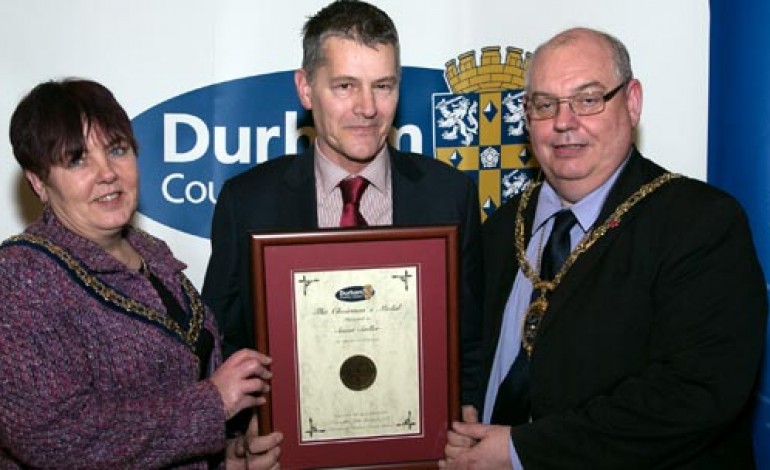 Susan Sadler can best be described as a pathfinder and most definitely a community champion.

After starting up a small group at her home, to help people who had found themselves in unfortunate circumstances, Susan founded the charity – Lifeline Community Action – which is based in Newton Aycliffe.

Susan’s charity has gone on to help well over 3,000 people and families suffering from poverty, ill health, unemployment and isolation.

And for all of her sterling work, Susan was nominated by Camilla Louise Shergold and put forward for consideration by Great Aycliffe & Middridge Area Action Partnership, for the Chairman’s Medal which she received from the Chairman of Durham County Council, Cllr John Robinson, JP, at a special ceremony held this evening at County Hall.

Following very much a Christian ethos, Susan’s helped instil this to the volunteers who always give a warm welcome and encouragement to those arriving through their doors, many who are quite often in very desperate and crisis torn situation.

Helping Hands – which is part of the project – offers emergency food and basic goods parcels, while the drop-in centre provides a haven for those requiring much required support, advice and assistance to help with their varying and critical needs.

Not just content with helping out, Susan’s introduced ‘developing people’ to help those coming through her doors to find work, improving physical health and learning practical life skills so they become more independent and resilient.

Speaking after the County Hall event, Cllr Robinson, said: “Susan’s the inspiration and driving force behind all this work and ‘saved’ many an individual or family from hitting rock-bottom and at times the depths of despair.

• Because of illness Susan Sadler was unable to attend the event and her husband Ken (pictured above with Aycliffe Mayor Wendy Hillary, collected the Chairman’s Medal from Cllr John Robinson, JP, the Chairman of Durham County Council.

All of the Chairman’s Medal winners are pictured below.