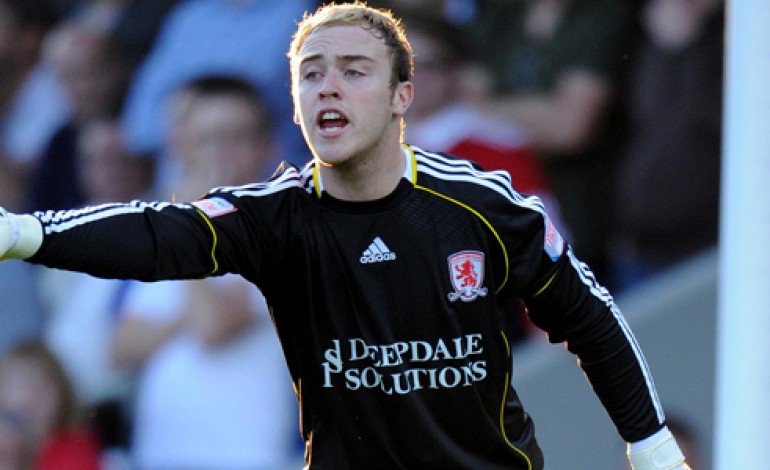 Aycliffe watched on last night as Middlesbrough faced local rivals Sunderland in the FA Cup fourth round replay at the Riverside Stadium, live on ITV1.

While many people’s interest may have been directed towards either side, the neutral could have been forgiven for missing the fact the Boro’s custodian, Jason Steele, is a born and bred Newtonian.

The 22-year-old stopper has firmly established himself as Boro’s number one ‘keeper, much like fellow Newtonian and www.aycliffetoday.co.uk blogger Ross Turnbull was, before his transfer to Premier League giants Chelsea.

3 mins
The man Arsene Wenger described as the ‘best dead-ball player’ in the league, Seb Larsson, fails to trouble the Newtonian, as his free-kick is comfortably dealt with by Steele.

5 mins
The rejuvenated Fraizer Campbell opens up an opportunity to cross from the right, but Steele reads the situation and dives low to smother the ball as it flashes across his six-yard area.

34 mins
A scorer of great goals, as opposed to a great goal scorer, Phil Bardsley, screeches a shot from outside the area across Steele’s goal, which again, the Newtonian decides to wave at confidently, rather than get his knees dirty.

42 mins
Sunderland youngster Jack Colback sends a left-footed half-volley into Steele’s net off the underside of the bar from 18-yards, having been granted too much space from the Boro defence. The Newtonian had no chance. He and Turnbull would have had no chance together. A great goal giving Sunderland the lead, which they take into the interval.

59 mins
Minutes after Lukas Jutkiewicz draws his side level, Steele is called upon after Justin Hoyte fails to deal with a bouncing ball inside the area following a right-wing corner. Steele pounces on the loose ball before Sebastian Sessegnon can steer home inside six-yards.

63 mins
Sessegnon again tests Steele, this time from 25-yards, but the Newtonian does enough to palm the ball wide of the goal to preserve parity.

72 mins
Steady build-up play from Martin O’Neill’s men sees the ball fall at Bardsley’s feet 30-yards out. The Scot blasts the ball through a crowd of players and off the base of Steele’s right-hand post, with the Newtonians despairingly diving across his goal.

80 mins
Bardsley receives a throw-in from Larsson on the right and unleashes another effort towards Steele’s top corner, which the ‘keeper beats away with two hands. Another fine save.

105 mins
The game goes to extra-time, but Steele remains largely unemployed in the opening period as Boro ask the majority of the questions. 15 to go and the Newtonian may be facing down the barrel of a penalty shoot-out gun!

107 mins
As former Boro midfielder Andy Townsend dares speak of spot kicks on commentary, the attention turns to Boro’s lack of experience. The ITV director directs his camera man to focus upon Seb Hines, Adam Reach, Curtis Main, Joe Bennett and Rhys Williams. No camera on Steele. Must be deemed a veteran. We hope so.

112 mins
Heartbreak for Steele, and Boro. Sessegnon fires low into the bottom corner through a melee of legs after receiving a fortuitous ball back from sub Connor Wickham following a strong run.

120 mins
With the game stretched as Boro seek a second equaliser, Sunderland break down the left. James McClean fires across Steele’s goal, which the Newtonian gets a helping hand to, to force the corner.

And so, after 210 minutes of football, the odd goal in five splits the sides, with Steele’s Boro left to wonder what could have been.

For Sunderland, next up it’s a home tie with Arsenal in the last-16, while Boro, and Steele can now concentrate on elevating the club back into the Premier League, where games like Arsenal and co, come around every week.