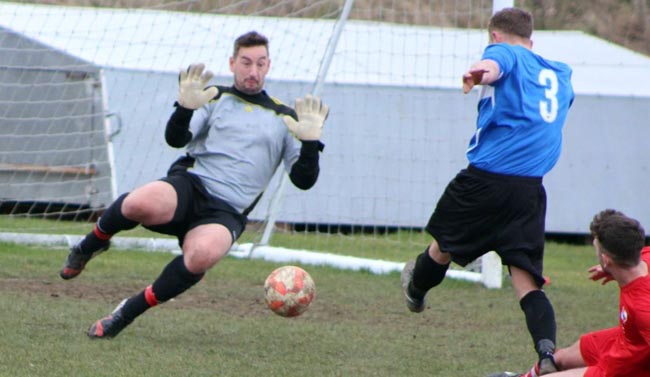 Newton Aycliffe Sports Clubs run in cup competitions came to an end on Sunday when they were beaten 3-2 off first division Shildon Supporters Club in the Wear Valley League Invitation Cup.

This defeat came on the back of last week’s exit from the Darlington Charity Cup to Division 2 leaders Mason Arms by the same score line.

The Aycliffe side proved tough opposition for both of the higher league teams and can be proud of their efforts to compete with both with only single goal deficits separating the sides on each occasion.

With promotion to Division 2 still a real possibility with four games left to play, both ties wetted their appetite to finish the league campaign on a high – but a lot of hard work is still required to ensure they stay on track.

The game at Sunnydale Athletics Track did not start to well for the away side. A corner in the 5th minute saw the home side take the lead as the Sports Club failed to clear. A few moments later, a similar situation at the other end of the pitch saw Darren Griffiths glancing header go just wide of the mark. However on 15 minutes Shildon Supporters doubled the lead with a strike from outside of the box beating keeper Andy Hartley at the far post.

The Sports Club managed to get back into the game on the 40 minute mark, leading goal scorer Connor Hughes collecting the ball from a throw in and driving it past home keeper Chris Wilson to make it 2-1. Then, before the whistle could be blown for half time, the Sports Club equalised – this time Darren Bosomworth (pictured above) driving the ball home to level things up at the break.

A change in formation and personnel saw Chris Jones and Jonathan Clegg replace Craig Hannant and Anthony Campbell at half time. Both sides tried hard to take the advantage and stop the game going to extra time and penalties and it was Andy Hartley who was the busier of the two goalkeepers twice saving brilliantly to keep the hosts at bay. With ten minutes to go though it was the hosts who grabbed the winner. After fending off 2 corners, it was the 3rd which could not be kept out as the ball crossed the line after numerous attempts to clear.

With only the league and a chance of promotion left to play for all efforts will made to try and regain the form recently seen over the past few months to try and secure a place in Division 2. Next week sees The Sports Club away to Willington Cottles before a short break taking them into the final run in during April.