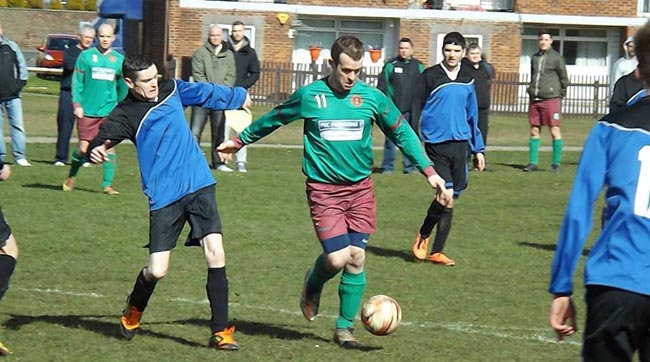 With everything still to play for in the DSIL Division 2 title race, Newton Aycliffe Sports Club continued their challenge with a comfortable win at home.

Both sides met just a fortnight ago, with the Aycliffe side triumphing 3-2 in a game played in tough conditions.

The home side opted for a 4-4-2 formation which saw the return of both Jon Hughes and Anth Campbell on the wings, with Paul Cook and Ryan Stonehouse chosen in the centre. Adam Gittins also returned into his familiar left back role and Chris Jones, playing his last game for the club before his impending suspension, was partnered up front with David Teder.

Aycliffe Sports Club started well, with a lot of possession and some neat crisp passing football.  It was on the quarter of an hour mark that the home side made the most of their advantage as Anth Campbell went on one of his customary mazy runs which finished with a power drive past the keeper to make it 1-0.

Ryan Stonehouse then contributed with his first goal of the campaign when the ball fell to him inside the box and he slotted home to make it 2-0 on the half hour mark.  The home side were looking comfortable at this point, but switched off for a poor 10 minute spell which saw some sloppy passing and lapses in concentration leading to the visitors sneaking a goal with their first shot of the half to make it 2-1 on the 40 minute mark. NASC FC regained the two goal advantage just before the break however, with David Teder feeding off Chris Jones and slotting home the third.

The second half was a much tighter affair as Tomkins looked to close down the home side a lot quicker than they had in 1st half and making it difficult for Aycliffe side to gain too much of an advantage.  It wasn’t until the 60th minute that home side killed the game off with Anth Campbell grabbing his second of the match, his seventh league goal of the season, 9 in total for the campaign.

This allowed substitutions to be made, with Captain David Hall being replaced by James Miller and Paul Cook replaced by Craig Barrigan to tighten up the centre of the park.  Miller, playing only his second game of the season due to injury, slotted into the back four well and helped ensure no more goals were leaked.  The Sports Club move up to Second in the league, leapfrogging The Huntsman, who they play next week in what is proving what may be the most important game of the season to date.  Both sides also have top side

Spraire Lads to play over the next few weeks to battle it out for the DSIL Division 2 Championship.

Also, NASC FC is holding a Promotion Party on Friday 4th April.  Local Band Live Lounge will be playing hits from bands such as Oasis, Kasabian, Red Hot Chilli Peppers, Artic Monkeys, Kings of Leon and many more.  Tickets are on sale now either from Paul Eales (07535 591614) or from behind the bar at The Sports Club at just £5 each – it’s going to be a great night – so why not buy a ticket and pop along to support the team.