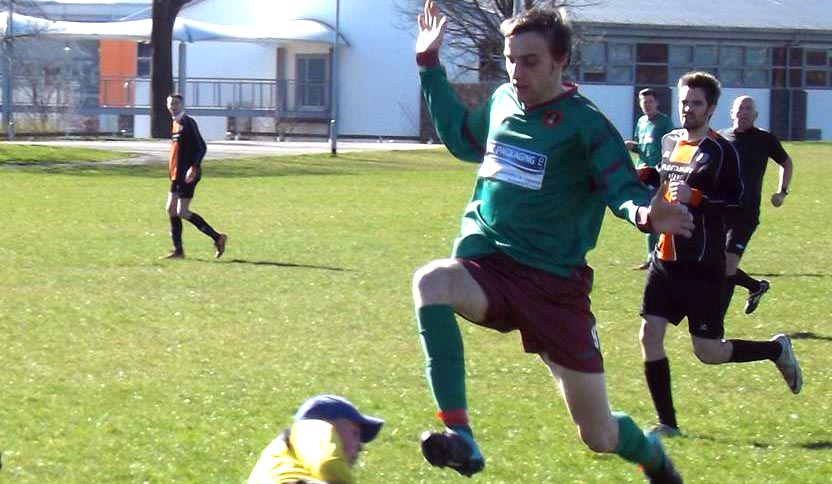 Having already won promotion, Newton Aycliffe Sports Club went to Darlington at the weekend knowing the league title was still up for grabs.

And they returned to Aycliffe with another three points to boost their championship aspirations as they hammered Blackwell Meadows 5-1 at Education Village.

Club Captain David Hall returned to the heart of the defence to replace Mark Craggs who is carrying a slight Hamstring strain with Matty Alder returning from suspension to cover the left back spot – with the rest of the starting line-up remaining the same as last week.

The Sports Club started the brighter of the two teams, with a lot of possession and with the wind in their favour they looked the more comfortable on the ball.  The deadlock was broken on 12 minutes, when leading scorer Chris Jones broke clear of the defence and slotted home past the keeper to make it one nil to the visitors.  Ryan Stonehouse then hit the crossbar a few minutes later with a driving effort after storming through the home sides defence.  Jones then turned provider for strike partner Glenn Hendrix after battling through the defence to pull the ball back for the forward to slot into an empty net.

The away side were looking very comfortable at this stage and extended the lead to 3-0 when Chris Jones was brought down in the box and slotted home the resulting penalty.  Not satisfied with just the two goals, Jones rounded off his hatrick five minutes before the half time whistle.

The leading scorer was then subbed at half time to allow Damien Jose his comeback after a long stretch on the sidelines to partner the ever threatening Hendrix up front.  With the wind now against them, the away side struggled to reproduce the impressive display from the first half.  On the 60 minute mark, Connor Hughes had to be substituted due to injury and Carl Little returned to the team, slotting into the Centre Half position and moving Gareth Boyes into the centre of midfield.  The home side took advantage of the changes and grabbed a goal within seconds of the change being made to make it 1-4.

The Sports Club hit back quickly though when Jonathan Cleggs deep corner found Hendrix at the far post to steal his brace and basically finish off the game.  With the win all but secured, the final change was made with Craig Clark slotting into the left back position for Matty Alder, who struggled most of the game with a suspected broken toe after an early challenge in the first half.  However, the highlight of the game had to be veteran David Hall crossing over the half way line for the first time this season and beating three men on a mazy run but once the goal was in sight, the legs gave in and the cross come shot failed to cause the damage it had promised when the run started in what seemed like an age ago.

NASC FC still sit 3rd in the league, but now just 2 points behind the Huntsman and 5 pts behind Leaders Spraire Lads (but with a game in hand on the top side) and with both to play in the next few weeks.  The end of season is really hotting up with both Aycliffe sides aiming to try and pip their Darlington rivals to the Championship.

Next Up is Tomkins at Home at Moore Lane on Sunday 23rd March.  Come down and cheer us on, kick off at 10:30am.