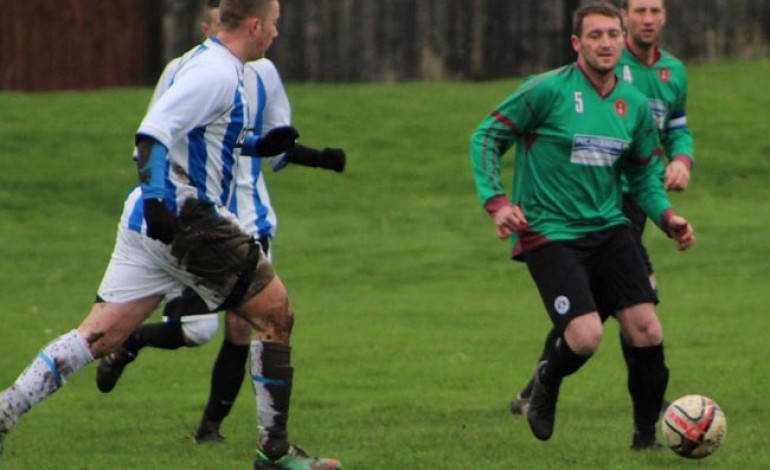 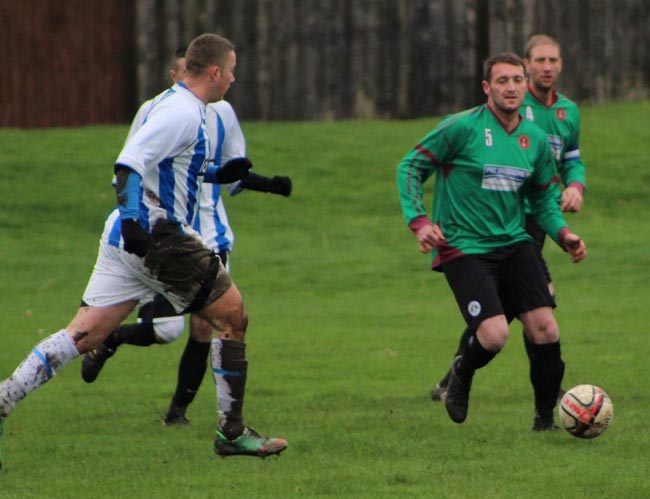 There had to be another re-shuffle of the squad due to absentees again this week and it was clear from the start that the heavy pitch was going to take its toll on both teams.

The Sports Club started the brighter of the two teams, controlling the tempo of the game well and with less than 10 minutes on the clock, Connor Hughes, continuing his excellent run of goalscoring form, broke the deadlock. A through ball from the inform Anthony Campbell saw Hughes take it round the last defender and slot the ball calmly past the keeper.

Just five minutes later, some excellent work from strike partner Chris jones which saw his cross-come-shot fall into the path of the advancing Hughes to hammer home his second.

However, some lapses in concentration saw Laceys grab one back on the 20 minute mark with a long ball over the top catching out captain Craig Barrigan and his defence, who were slow to react.

Laceys equalised 5 minutes later with a mirror image of the first goal and their 3rd followed just before the break to see the Sports Clubs bright start to the game slide away going into half time.

Midfield Maestro Gareth Boyes – Bossing the centre of the park

The second half started pretty much as the first had, with the away team bossing the early exchanges. Gareth Boyes, in outstanding form of late, dominated the centre of the park with his tough tackling and controlled passing. On the 50 minute mark, a through ball from Campbell, found Jones, and after beating the offside trap and rounding the keeper , he made it 3-3.

With the pitch tearing up badly, both teams found it difficult to gain any momentum and the next goal was always going to be the most important. It was on the 65th minute that the goal came. With a slight suspicion of offside, it was Chris Jones again who received the ball from midfield to fire home his second and the Clubs 4th of the game, which turned out to be the deciding goal and the only real difference between the two teams.

The Sports Club now sit 7th in the table, with a couple of games in hand on those above them. Next up is Shildon Crossings (away) who are just 1 point behind them and after a controversial 5-5 draw at the start of the season, a tough game is expected to be had.

Newton Aycliffe Sports Club would also like to announce an additioanl new sponsor for their training and leisure wear. Amazing Results (Estate Agents) will contribute towards the purchase of new tracksuit bottoms and T shirts to help us all look that little bit more professional and a whole lot smarter. A further announcement will be made shortly on this.