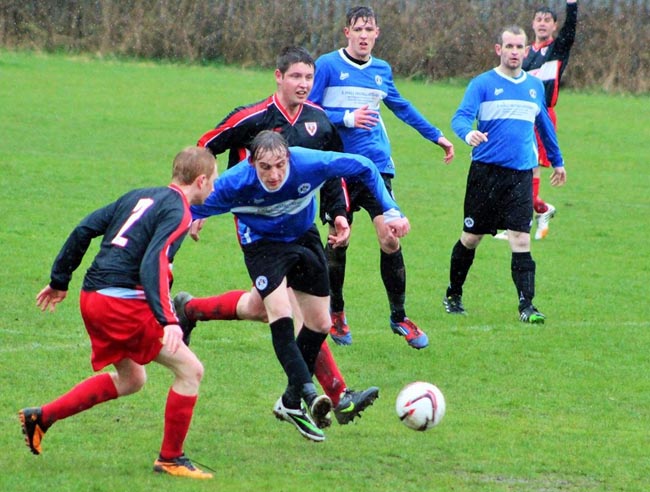 Four league wins in a row, which included 10 goals for leading scorer Chris Jones, saw Newton Aycliffe Sports Club secure the runners-up spot in the Wear Valley Sunday Morning League with their second promotion in as many seasons.

Last week’s 6-3 victory against Cockton Hill Club, which saw Chris Jones bag his second hatrick in as many games, was matched again this weekend when he made it three hatricks in a row against Shildon 3 Tons in the last game of the 2014/15 season.

This secured his position as top goal scorer at the club for the second season in a row, with 36 goals, with Connor Hughes close behind on 30 – a formidable partnership this season.

In the pouring down rain the Aycliffe side did not get off to the best of starts going one nil down after 20 minutes after failing to clear a low driven cross from the hosts which saw stand in keeper Craig Hannant beaten at the far post.

The conditions made it difficult for either side to take control and with just a few moments to go before the half time break Chris Jones managed to beat the offside trap and slot home his first of the game.

The second half saw the away side take control, with substitute Ryan Stonehouse coming into the centre of midfield and Gareth Boyes moving from centre back into his more usual role alongside Stonehouse in the centre of the park.

Chris Jones quickly wrapped up his hatrick with two well taken goals but a quick reply for the 3 tons from the kick off opened the game up for an exciting final 20 minutes of the game.

However, Ryan Stonehouses wicked strike from the edge of the box secured the points and ensured the Sports Club finished on a high.

With ten minutes to go, Chris Jones was substituted to allow veteran David Hall to make his final appearance for the Club.

Known fondly as “The Chief”, Dave has decided to call it a day on Sunday football to concentrate on over 40s football next season. He almost rounded the game off with a goal after good and unselfish work from Connor Hughes freed him up to strike towards an empty net…but he somehow managed to slot the ball wide of the goal.

“We would like to go on record and wish David all the best in his new venture and thank him for all the hard work he has put in both on and off the pitch, he will be a big loss to the club and greatly missed by all,” said the club.

The club will be looking to organise a Presentation Night soon to take the opportunity to thank players, families, friends, sponsors and supporters for backing us during the season, details will be announced soon.