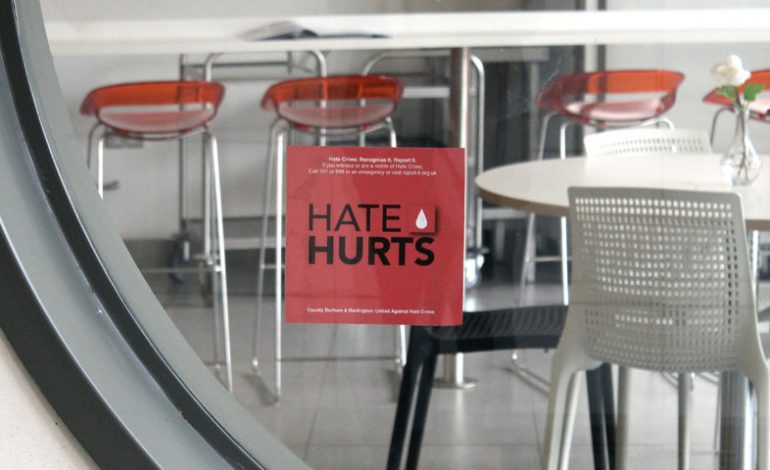 Organisations across County Durham and Darlington are making a big noise this week in a campaign to raise awareness of hate crime.

Earlier this year the area’s Police, Crime and Victims’ Commissioner Ron Hogg brought together representatives from charities, business, sport, education, and the faith communities to demonstrate a united stance against hate crime.

This week, leaders of the organisations involved in the campaign are recording short messages to go on social media, setting out their condemnation of hate crime and asking people who witness or experience it to report it.

Chief Constable Jo Farrell said: “We pride ourselves on being an inclusive force and put victims front and centre of everything we do.

“Hate crime usually happens in a public place where people witness it. I want those witnesses to call the police and get some assistance for the person being targeted then give as much evidence as possible to support the victim and bring offenders to justice.”

Hate Hurts is a high-profile campaign that informs people about hate incidents, encourages victims and witnesses to report it and celebrates initiatives that promote tolerance and cohesion.

Hate Hurts has become Durham Constabulary’s brand to combat hate crime, and posters and leaflets can now be seen across the area. Takeaways, pubs and shops are asked to display window stickers.

Councillor Lucy Hovvels MBE, chair of Durham’s Police and Crime Panel and Cabinet member for Adults and Health at Durham County Council, said: “We are proud to stand together with the Police, Crime and Victims’ Commissioner, Durham Constabulary and other partners to send out a clear message that hate crime will not be tolerated in County Durham.

“Our communities are safe and welcoming places for everyone and it is important we take a proactive approach to ensuring they remain so. Raising awareness of hate crime and the impact it has on victims is crucial.

“I would urge people to use Hate Crime Awareness Week as an opportunity to find out more about the work that is being done to combat the issue and how they can help.”

Hate crime describes a range of illegal criminal behaviours committed against someone else because of their disability, race, religion, sexual orientation, transgender identity or some other perceived difference.

It can include verbal abuse, intimidation, threats, harassment, assault and bullying, both online and offline, and damage to property.

The number of reported hate crimes in County Durham and Darlington has risen over the past few years, partly because people are more prepared to report it, and also because the number of hate incidents appears to be rising.