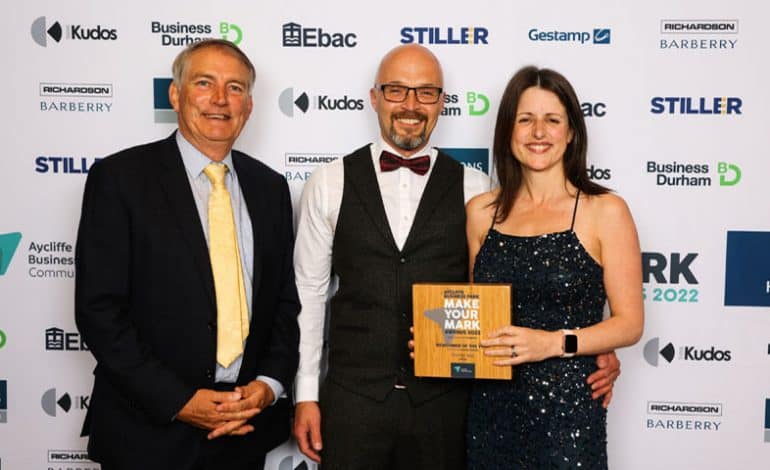 The husband-and-wife team behind the new Fish Tank facility on Aycliffe Business Park were proud to have won the Aycliffe Newcomer of the Year award against such tough opposition.

The Fish Tank opened its doors on Aycliffe Business Park in January 2020 and is now established as one of the North-East’s premium family swimming and activity venues.

The facility – run by Paul and Penny Gordon – pipped Rare Rockets and Valhalla North to the Newcomer category in the 2022 Make Your Mark Awards, held at Redworth Hall Hotel.

“It’s amazing to win this award – we really appreciate it,” said Penny.

“Thank you to everyone who made that decision and got us here.”

And Paul added: “I think we’ve done fantastically well. There are some amazing new businesses on the park and to be recognised as newcomer of the year means the world.

“It’s awesome. It’s at times like this that you look back and realise how far you’ve come.

“It really means a lot to be recognised as newcomer of the year on the business park – it’s fantastic.”

Paul and Penny spotted an opening in the market for a bespoke baby and toddler swimming centre.

In the first three months of this year alone, the Fish Tank welcomed more than 6,000 customers through its doors.

Penny: “We’re both really passionate about what we do. We wanted the venue to feel welcoming and accommodating and I think our passion has shown through.

“And we’ve chosen the right team to make that happen – it’s not just me and Paul, it’s the whole team and they deliver our vision.

“We’re now teaching 400 babies, toddlers and children to swim every week at The Fish Tank which is pretty amazing – a nice life skill for everybody.”

Paul said: “It’s taken a lifetime to get here and make The Fish Tank a reality. It was an uphill struggle to get it built and then lockdown hit, but we got through it, we survived and now we’re thriving.”

Since opening, The Fish Tank has grown its team to 15 – between The Fish Tank and The Happy Swim Company – and currently teaches 350 babies and children to swim every week.

And Paul and Penny’s ambitions don’t stop there, with the couple having already identified three more potential sites in the North-East for expansion.

“We’ve got The Swim Company, which runs from The Fish Tank exclusively, so with those two businesses, we’ve got what it takes to roll it out.

“We’ve got multiple sites identified across the region already and are in talks with developers to get on specific sites, so the next few years are going to be a lot of hard work but it’s definitely going to be worth it.”

Business Durham managing director Sarah Slaven said: “The Make Your Mark awards was a truly inspiring event, it was great to see so many businesses being nominated and of course a huge congratulations to all the winners.

“After a challenging two years, it is very important that we recognise the achievements of businesses on the Aycliffe Business Park.

“Our role at Business Durham is to support businesses new and established in the county, and we were delighted once again to sponsor the ‘Newcomer of the Year’ category. It is so important to celebrate new businesses, whether they are just setting out or are new to the area.

“Learning about each one of those nominated, they all would have been worthy winners.

“So, congratulations to Rare Rockets and Valhalla North, on their nomination, and to The Fish Tank, in particular, for winning Newcomer of the Year.”