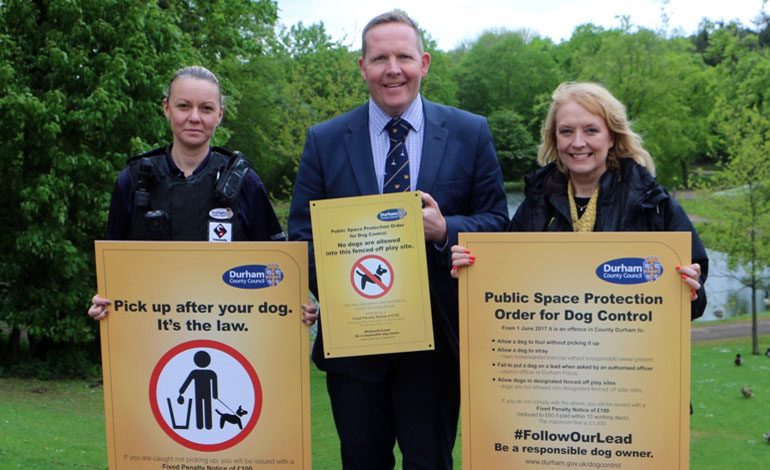 Dog owners are being advised of new rules that will come into force in County Durham at the beginning of June.

People can find out more about the new rules through the council’s #FollowOurLead, campaign.

The order, which will replace the existing Dog Control Order introduced in 2009, means that from Thursday (June 1), it will be an offence to:

Anyone seen flouting the new rules will be issued with a £100 Fixed Penalty Notice (FPN), reduced to £60 if paid within 10 working days. Failing to pay the FPN will result in court action and a possible fine of up to £1,000.

The order will not apply to anyone who is registered blind, is disabled or who uses a trained assistance dog.

In order to help owners abide by the new rules, a designated dog exercise area is available at Hardwick Park, Sedgefield, for owners who wish to use it. Similar areas will also be available soon at Chester-le-Street Riverside Park and Waldridge Fell Country Park.

The introduction of the PSPO follows a public consultation at the end of last year, when more than 80 per cent of those who took part said they were in favour of the move.

Ian Hoult, Durham County Council’s neighbourhood protection manager, said: “While the majority of dog owners are responsible, there are still those whose actions impact upon our communities – whether it’s failing to clear up after their dog or being unable to control it when off a lead.

“The new order will enable us to crack down on these problems, making our communities safer, cleaner and more welcoming for everyone.

“In order to spread the message about the new rules and encourage everyone to abide by them, we’re asking people with dogs to #FollowOurLead and help inspire others to be responsible owners.”

The order is also being supported by a number of town and parish councils, who have requested that play areas they are responsible for are included in the PSPO.

The council’s Civic Pride team will be attending monthly health check events organised by the Dogs Trust to offer advice on the PSPO. The drop-in events are free to attend.

For more information on the PSPO, including Frequently Asked Questions, a list of fenced off play areas included in the PSPO and details of free Dogs Trust health check event, visit www.durham.gov.uk/dogcontrol