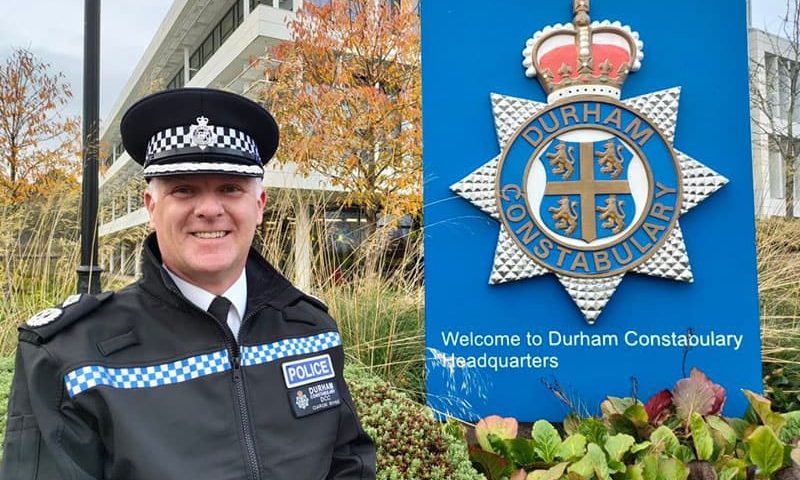 Durham’s new deputy chief constable has taken up his post.

Ciaron Irvine, who joins the force from neighbours Cleveland, spent part of his first week joining officers on patrol in Durham city centre.

It proved a sort of homecoming for the Liverpool-born officer who first moved to the North-East to study at Durham University before joining the police in 1994.

Ciaron, whose family have strong links with policing going back over many generations, said: “I am proud to continue that family tradition and especially proud to be doing so in Durham with this role in the Constabulary.”

A married father-of-two, Ciaron has worked in mainly uniform and specialist operations roles during his 27-year career with both Cleveland and North Yorkshire forces.

A former head of the force control room and as a district commander for Redcar and Cleveland, Ciaron established and led Cleveland’s Tasking & Coordination Command, with overall responsibility for daily operational tasking, the management of intelligence and force performance.

More recently, Ciaron served as temporary assistant chief constable both in Cleveland and North Yorkshire, prior to his posting as Cleveland’s lead for Business Services.

He is an accredited firearms, public order and multi-agency gold commander with experience of major public and sporting events.

He added: “In all my leadership roles I have always sought to ensure that we deliver the best possible service to our communities alongside taking a keen interest in the welfare and wellbeing of our staff.”

Ciaron formally took up his new role on Monday, taking over from deputy chief constable Dave Orford who will retire from policing in the New Year.

Chief constable Jo Farrell said: “I am absolutely delighted to welcome Ciaron to Durham: he brings a huge wealth of policing experience to the role and is a fabulous addition to the team.

“Ciaron arrives with a good working understanding of policing the region and the challenges we face as well as a deep commitment to delivering excellent policing to our communities. I am confident he will hit the ground running.

“I would also like to take the opportunity, on behalf of both myself and all at Durham Constabulary, to thank Dave Orford for his dedicated service to policing over the years.

“He has been an invaluable help to me and an inspiring example to everyone in the force. He will be a tough act to follow, but I am certain that, in Ciaron we have the perfect successor.”