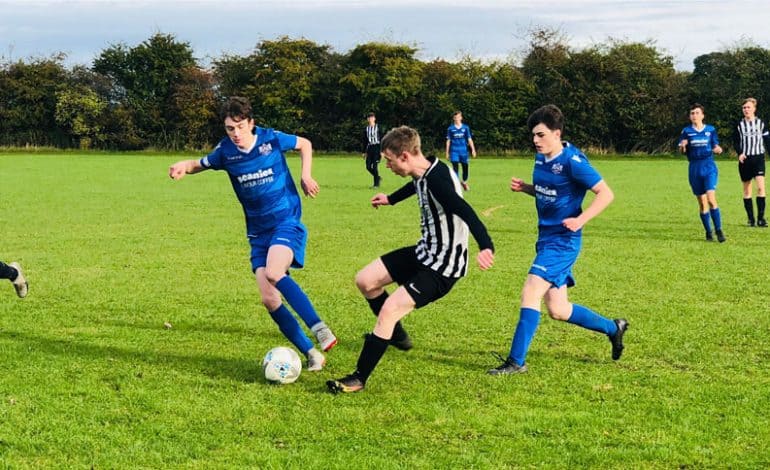 U9’s whites played Coxhoe United at the weekend with the end result seeing both teams taking a share of the spoils. It was a good game with Aycliffe taking a 2-goal lead, but two defensive errors near the end seen the game end level. A much-improved performance from the boys, finding space and passing the ball around well. MOTM was Oscar, magnificent work rate & 2 goals.

U10’s Juniors travelled to Darlington Allstars Sunday morning. An exceptional performance from the whole team despite the awful conditions, we came away with a well-deserved victory. Goals from Jonah (2) & Charlie. MOTM Jonah.

U10’s Black’s took on Hilda Park in a tough game for the boys, with only 7 players and poor conditions. Hilda Park took an early lead, but the boys kept working hard with some good passing and team play. We managed to level the score but couldn’t hold onto it and unfortunately the result didn’t reflect the hard work the boys put in today. Goals from Rhys and Harry. MOTM Oliver and James – they both gave everything they had today and more!

U11’s were away to Saltburn in what was awful conditions to play in. However, the lads put in an impressive performance and came away with a great result. Goals scorers were Alex 2, Sam, Evan & Archie. MOTM was Alex.

U12’s travelled to Marske UTD on Sunday and playing on a 3G, were unaffected by the conditions. Both teams started well but on 4 minutes, Marske opened the scoring, 1-0. Aycliffe were playing great football, well led by captain Thomas. A couple of player changes @ HT and Zeke’s excellent first-time pass found Callum who slotted home, 1-1. The remainder was an open game, and although Thomas hit the post, neither team could get the winner. FT1-1. Goal from Callum & MOTM Thomas.

U13s Black’s hosted Consett on Saturday with the first half being dominated by Aycliffe. The awful conditions didn’t help the lads in the second half, they were freezing, but still managed an all-round superior performance. The Ref again was great, game ending with a 5-0 victory. Goals from Danny x2, Jayden H x1, Keaton x1 & Luke x1. MOTM was Harry, well done.

U13’s Whites now unbeaten in 3 matches thanks to a 1-1 draw today at home to Darlington Young Bulls. With terrible weather and the match on the verge of being abandoned, Ethan put us ahead after 14 minutes. Darlington hit back on 20 minutes thanks to a deflected shot. Aycliffe dominated the game and should have taken all 3 points with some excellent football being played. Only the puddles stopped us winning. MOTM was James, who was rampant down the right wing.

U14’s Whites hosted Boro Whites at home on Sunday. It was like an old school game of football with puddles forming on the pitch. Boro Whites ran out 3-1 winners, but Aycliffe were brilliant second half and deserved a point at least. Tyler R scored the goal with Jack R getting MOTM.

U15’s made the long trip to Whitby Sunday morning. The conditions were awful from the start with fierce winds and torrential rain. With the weather getting worse by the minute, the Referee made the decision to abandon the game after 30 mins with Aycliffe leading 2-1 thanks to two goals from Travis.