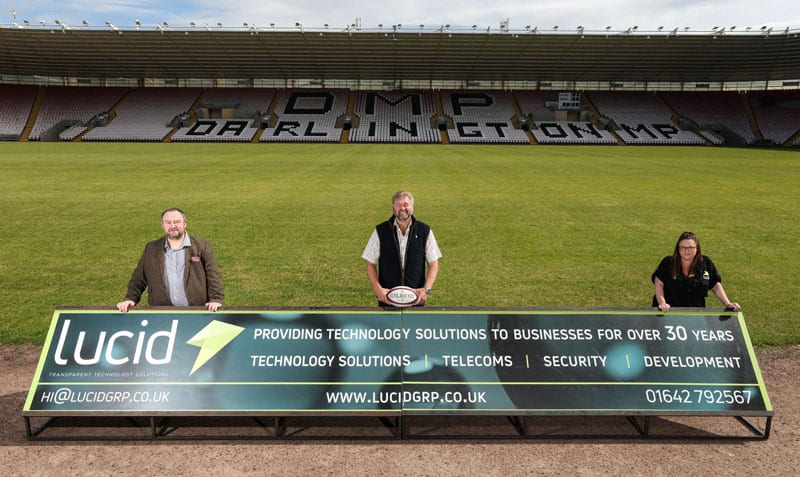 Lucid Technology Solutions have agreed to extend their sponsorship of Darlington Mowden Park RFC for a further five seasons.

The local IT experts – which works with a growing number of firms on Aycliffe Business Park – has been supporters of the club since their move to the Arena in 2012, and will continue to provide technology support until at least May 2026.

Lucid’s technology director Paul Alsop said: “I am delighted to be able to continue our partnership with the club for the next five years.

“The values of the club and its members are directly in line with our own which makes it an easy decision to continue and extend our support.

“We are excited about being able to help the club grow out of the difficulties everyone has experienced over the last 18 months and look forward to further improving services within the stadium over the coming years.

“We can’t wait to be back at the stadium for live rugby and will be introducing as many people as possible.”

Formerly known as Yarm Computers, Lucid rebranded in 2018 and moved to their new premises in Norton in 2019 as the business continues to grow year-on-year.

Having successfully completed 30 years in business, their team has grown from two to over 20 and continues to work with a number of firms on Aycliffe Business Park.

The growth and ever-changing dynamics of technology has allowed Lucid to expand as a company and focus on the provision of a wider range of support.

The renewed partnership will also see Lucid’s logo appear on the DMP playing kit for the first time, featuring on the first team’s playing shorts for the next five league campaigns.

Mowden Park chairman Mick Birch added: “Paul and the team at Lucid have been huge supporters of the club for the last eight or nine and I’m thrilled that they’ve pledged their support.

“We’re hugely grateful for their ongoing support, particularly given the difficult year we’ve all had, and I thoroughly look forward to welcoming them back to the Arena for a game in the near future.”

For more information on Lucid and the range of products and services they offer, visit lucidgrp.co.uk.