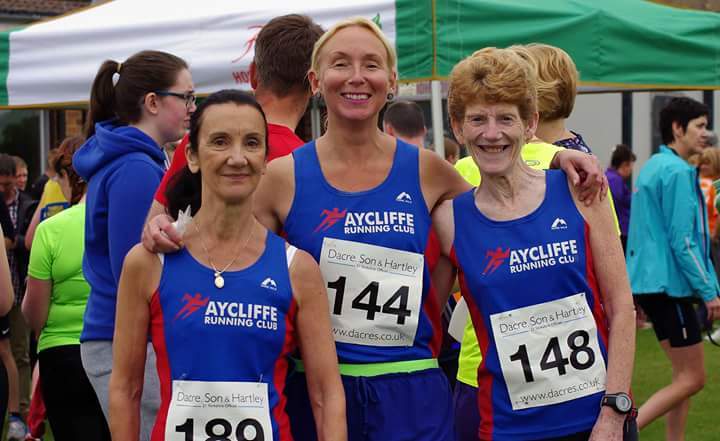 Runners from Aycliffe running club have participated in a range of races over the past few weeks, including a 5k, 10k and a 23.2 mile fell race.

On Thursday 9 June Trish Kay participated in the Blaydon race; it was a really warm evening and there was a great atmosphere. The 5.7 mile course went from Newcastle to Blaydon. Trish completed the course in 43:29 and was pleased with her time.

On Saturday 11 June club runners participated in Swaledale marathon. This fell race takes runners and walkers over 23.2 miles with 1258m of ascent. First home for the club was Matt Heron in 04:51, then came, Susan Cranswick and Sandra Collins both in 05:14, Michael Brunskill in 05:20, Matthew Phillipo in 05:36, Beverley Phillippo in 05:53, Rob Nicholson in 05:54 and Judith Porter in 06:19. Other club runners turned out to support and enjoy a walk around parts of the course, including Trish Kay who walked 10 miles of the route.

On Sunday 12 June three club runners participated in the Bedale 10k event hosted by Herriot Hospice Homecare. There was also a 5k event and participants could either run, jog or walk on a section of the bypass which is currently undergoing works. The 10k route was all on the road apart from the end section which was round a field. Trish Kay finished in 60th position with a time of 50:33, Angela Barrett finished in 84th position in 53:39 and Susan Clark finished in 156th position in 1:04:18. There was a field of 207 runners at this friendly event.

• Pictured (above) is Trish Kay, Angela Barrett and Susan Clark after their 10k race in Bedale.