U8’s
Away to Hartlepool St Francis who stormed into a 2 goal lead, but we got back into the game with a goal from Kyle after good work from Parker. HT 2-1. Second half saw us press for an equaliser and looked likely but got caught on the break again to trail 3-1. Thomas pulled another goal back as we again pushed forward with good play from Kiera a some good saves from Lleyton we were hopeful of getting an equaliser. We missed chances, inc hitting the post, but Hartlepool caught us again to score twice to make the final score 5-2. Unlucky in the end after battling performance. MOTM Thomas Francis

U9’s Russell Foster
2nd victory in a row!! Against a determined Shotton side. Despite dominating the first half, it ended 0-0. 2nd half, Shotton struck first but we equalised shortly afterwards, with Evan following up after Bo’s shot was saved by the keeper. Aycliffe continued to put pressure on Shotton, with some excellent play from Sam & Evan setting up Bo, who was brought down in the box. Captain Sam Porteous stepped up, top left hand corner, 2-1. With Matty moving the ball well in defence, Isaac, Evan and Taylor linked to set Bo free, and despite his first effort beating the keeper but coming back off the post, Bo reacted first to extend Aycliffe’s lead. Shotton got one back but FT 3-1. An all-round excellent, strong performance. MOTM Ted Hayward.

U11’s
Home Vt Cleveland Panthers, our penultimate game. They are currently 2nd in the league & started the game as expected attacking the Aycliffe goal from the off, scoring within 5 mins. At times Aycliffe played good football but never really their goal. Cleveland forced Aycliffe to play deep & were the stronger team with clinical finishing, meaning the half ended 0-5. We came out fighting, moving the ball around well, frustrating their opponents. The whole team from goalkeeper to subs gave 110%, without reward, FT 0-8. We lost today to a stronger footballing team, but the lads showed real heart and team spirit never giving up and chasing every ball, ending the game with smiles on their faces. Well done everyone we couldn’t ask for anything more. MOTM was awarded to Dylan S

U11’s
last game off the season at home V D/ton Allstars C. Against the run of play D/ton were the 1st to score, then Aycliffe drew level within minutes when Adam made a run down the left wing, beat the defender and slotted the ball past the goalkeeper, the rest of the half was evenly matched but D/ton went on to score a further 3 HT 1-4. Aycliffe continued their attacking play in the 2nd half and had most of the chances, but were again denied by the D/ton keeper and also the post. Then Kyle made a run down the wing and scored, minutes later Kyle made another run down the wing, took a shot that went across the goal mouth and Zak was on hand to knock the ball in. An injury to Nathan in goal saw Jake come on as substitute keeper, he was soon tested by a goal mouth scramble, and knocked the ball out three times before Curtis made a goal line clearance. Aycliffe should have had three or four more goals but were again denied by the keeper & the post. They battled to the end and were the better team in the 2nd half but unfortunately the result didn’t go their way today, final score 3-4. A great team performance today, the result may not have gone our way, but it was a thrilling end to the season, well done everyone. Man of the Match was awarded to Kyle who came on for the 2nd half and was involved in both goals.

U13’s
We played our penultimate game today against local rivals Bishop Auckland St Marys Kings. We drew with them 1-1 earlier in the season so was hopeful of a good result for this tie. It was not to be…..we just didn’t really turn up today, they wanted it more than us and deserved the 6-2 victory….Damian Lawson and Lewis Hynes finished well for our 2 goals and Ethan Stoker in goal was AGAIN superb, but it wasn’t to be….I think, as they say, our players were already on the beach. MOTM to Logan Sanderson Howes, his effort today was above all others…well done buddy!

U18’s
Home V Hetton Juniors who we drew with a 4-4 draw away. We started strong with pressure early on and getting forward as often as we could. The lads kept the pressure on late into the half and still to no end product. The ball fell to a Hetton player on the edge of the box to strike past Todd H-T 0-1. 2nd half and it was non stop pressure from Aycliffe, and Raine was played through on goal and coolly slotted home 1-1. Aycliffe corner, delivery of Howe was perfect, Fitzgerald heading home 2-1. 20 minutes left Craggs scored a 3rd, FT 3-1 Great Result. 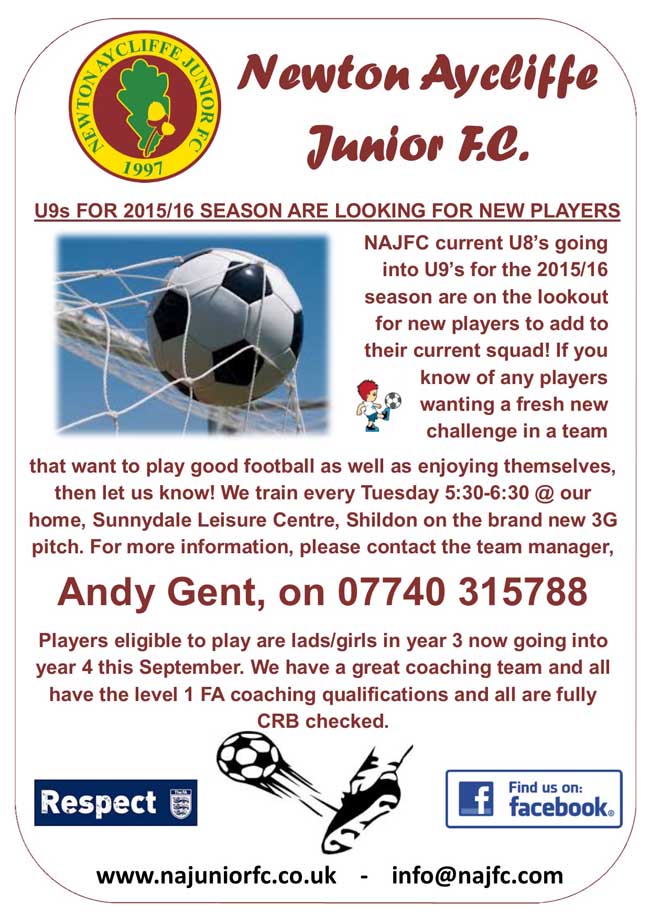