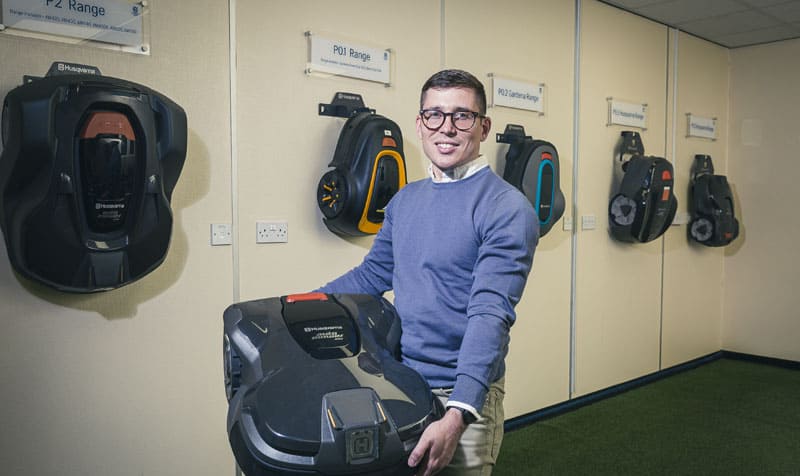 Robotic lawnmower manufacturer, Husqvarna, is a company that takes pride in growing its own talent. Peter Barron visits the well-trimmed Aycliffe site to find out more…

By his own admission, Rufus Ayre had no clear idea what career path he was cut out for when he left college after a working-class upbringing in County Durham. All he knew was that university wasn’t right for him.

Instead, he signed up with an apprentice agency and, within days, he was sent for his first interview at the Husqvarna robotic lawn-mower plant on Aycliffe Business Park. He must have impressed because, an hour after leaving, he’d been offered a job.

A decade on, Rufus has risen through the ranks to become the company’s UK learning and development officer, and his sights are now firmly set on helping other young people grasp opportunities with one of County Durham most innovative employers.

“I suppose it was a sign of the times when I was leaving sixth form college that you were viewed as something of a failure if you didn’t go to university. You were almost looked down on, but I knew it wasn’t the right step for me,” he says.

“I’ve been incredibly lucky – Husqvarna gave me a chance, and I’ll be forever grateful for that. Now I’m in a privileged position to help other young people grasp the opportunities that are here and make the most of their potential.”

Rufus, now 29, grew up in Crook. His dad was a logistics manager at the old Dyson brickworks, while his mum worked in the rather more glamorous fashion industry in London. “She gave it all up to have me!” laughs Rufus, from behind the mask that has been mandatory for all employees at Husqvarna throughout the pandemic.

But there’s no masking the pride he clearly feels at the progress he’s made since signing up as an apprentice, uncertain of what direction to take. For a start, there’s the fact that the boy who didn’t feel ready for university went on to achieve a first-class honours degree in International Business Management, at Teesside University, after being sponsored through the course by Husqvarna.

Indeed, Rufus is a shining example of the company’s commitment to growing its own talent through training and development.

“When I came here, I was always motivated by looking around at the management team and seeing that the majority of them had started as apprentices – that said so much to me about the culture of the company,” he says.

Those former apprentices include operations director Caraline Robinson, and the focus on training is continuing apace under her leadership, with more than 50 apprentices being recruited by Husqvarna last year, and 35 successfully completing their training.

“Apprenticeships can be misunderstood – you can be an apprentice at any age, and with a variety of skill levels,” explains Rufus. “I would 100 per cent recommend it to anyone who doesn’t feel the university route is for them.”

Around 400 permanent staff, and between 450 and 500 temporary seasonal workers, are employed at the Preston Road site on the Aycliffe Industrial Park – with no less than 50 apprentices recruited in 2019. 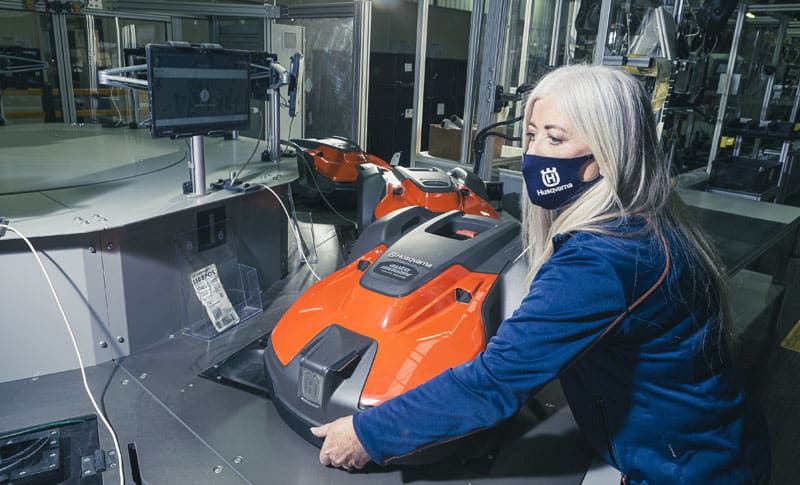 And it is to their enormous credit that production levels have been maintained throughout the coronavirus pandemic, with the plant only having to shut down for a deep clean for six working days last May.

Husqvarna are now recruiting for maintenance technicians and engineering apprentices to support both existing and future technological improvements and advances in manufacturing facilities.

Assembly production manager, Tony Day, is quick to join Rufus in paying tribute to the dedication of the workforce during that difficult time.

“Success is all about people and our staff have been exemplary,” says Tony, a Hartlepool lad, who started as an engineer back in the old Flymo days, and spent 14 years in the automotive industry, before returning to the plant after Husqvarna took over.

“To work on a production line with a mask on all day is very difficult, but the workforce was world-class in the way they rose to every challenge – I couldn’t be prouder of them,” adds Tony.

Like every major business, the plant had to undergo a swift reorganisation when Covid-19 struck, with social distancing established, along with one-way systems, screens, and numerous hand sanitisation stations.

Team numbers were reduced, facemasks made compulsory, Covid marshals appointed, cameras installed to monitor temperatures, vending machines switched off, and kettles and microwaves withdrawn to minimise the risk of infection.

Despite it all, the quality of the wide range of products remained excellent, and the business has emerged from a year of global challenge in good shape.

Tony also acknowledges the importance of the departments that support manufacturing, including: human resources; the moulding section that provides all the plastic parts; engineering and maintenance; quality control; product support; and logistics. 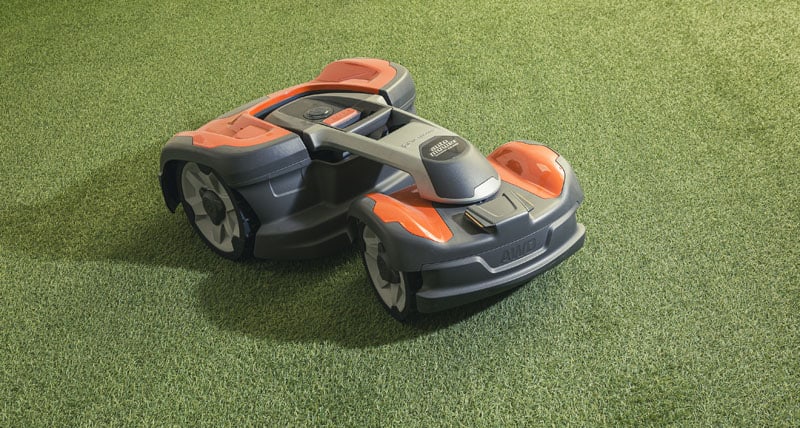 The company’s partnership with GEM Partnership has also proved crucial. The Peterlee company provides bespoke training and apprenticeships for its clients, and Tony says: “GEM were absolutely fantastic last year – we couldn’t have managed as well as we did without their support.”

Even in the midst of the biggest public health crisis in living memory, a company such as Husqvarna can never stand still. It has to be constantly adapting, embracing the very latest technological advances, and looking to the future.

Having taken over the plant from Flymo in the 1990s, the company started producing robotic lawnmowers at Aycliffe in 2005. The cynics claimed they would never catch on, but a million had been produced by 2017 and, with artificial intelligence emerging fast, the technology is opening up all kinds of new opportunities, many of which remain under wraps for now.

“If we want to be at the top of the league, and stay ahead of the competition, we have to be continually developing our products, and invest heavily in research and development,” says Tony.

And so, a company that began by making rifles for the Swedish monarchy in the 1600s, is now at the cutting edge of robotics in 2021 and employing hundreds of people in the heart of County Durham.

It’s a fascinating success story that’s been centuries in the making. And Rufus Ayre, the uncertain boy who grew up down the road in Crook, is proof that there are exciting opportunities for anyone who wants to be part of the chapters yet to come.