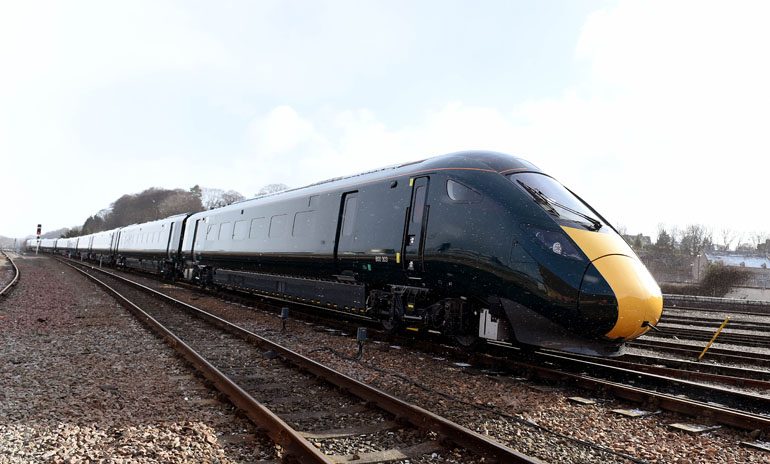 One of Hitachi’s new Intercity Express train has arrived in Inverness depot for the first time this week, ahead of improving passenger journeys when they enter service later this year.

The Hitachi-built train, which will offer customers more seats, space and improved on-board technology, is doing test runs in Scotland and giving depot staff the chance to familiarise themselves with the train.

A £5m investment has been made at the Inverness depot, by Hitachi Rail through the government-led Intercity Express Programme, to allow the trains to be serviced and maintained using modern technology, this in turn will mean more reliable, delay-free journeys for passengers.

The test train, which was built in Japan, will be followed by 64 Aycliffe-built Intercity Express trains that will run from Inverness and Aberdeen, via Edinburgh, to London.

In a first for a UK passengers, the Intercity Express trains, which are already in operation on the Great Western Mainline, are a hybrid. They can run on either electric or diesel power, meaning they are both more flexible and better for the environment.

There are currently 24 trains in service on the Great Western Mainline that have travelled over 697, 947 miles since service began on October 16.

Under electric power the trains will produce no emissions and have a maximum speed of 125mph. Yet, even in diesel mode, harmful emissions, like PM10 and NOx, will be reduced by up to 90%, compared to older trains (like the 40 year-old HST).

The new trains and depot infrastructure are being built as part of the UK Government-led £5.7bn Intercity Express Programme that is also supported by Hitachi’s investment in their £82m purpose-built factory in Aycliffe.

A further £20m is being invested in depots across Scotland, at sites including Edinburgh, Glasgow, Aberdeen and Inverness, to maximise the reliability of trains for passengers.

This will see upskilling of depot staff and the installation of new technology to allow the trains to be maintained and serviced in Scotland for more than 27 years.

The move will also see around 300 people employed in depots in across the country and a renewed focus on bringing new talent into the industry.

The Intercity Express trains that are due to run on the East Coast Main Line are just one of three different fleets that Hitachi is building for Scotland.

There are also 70 Class 385 electric commuter trains, which will run between Edinburgh and Glasgow, and 19 Transpennine Express trains that will connect Northern England with major cities in Scotland.

Andy Rogers, Hitachi’s Intercity Express programme director, at Hitachi Rail said: “We’ve beaten the snow and the so-called ‘beast from the east’, with the train completing its test run from Edinburgh to Inverness successfully.

“Having the train at the depot, with its new £5m investment, is an important milestone for the project and it means the start of service is a step closer for people in Scotland.

“Later this year, trains will make it easier and more pleasant for passengers to travel around the country, boosting leisure journeys, connectivity and local economies.”

Rail Minister Jo Johnson said: “We are investing in the biggest modernisation of our railways since the Victorian era to give passengers what they want – more frequent services and quicker journeys.

“The new state-of-the-art Intercity Express fleet provide more space, more comfort and more reliability for passengers on the East Coast Line when they are introduced later this year, with 65 new trains and nearly 500 new carriages running between London and Scotland.

“These trains are part of the £5.7bn Intercity Express Programme that will bring in modern faster trains across the country.”