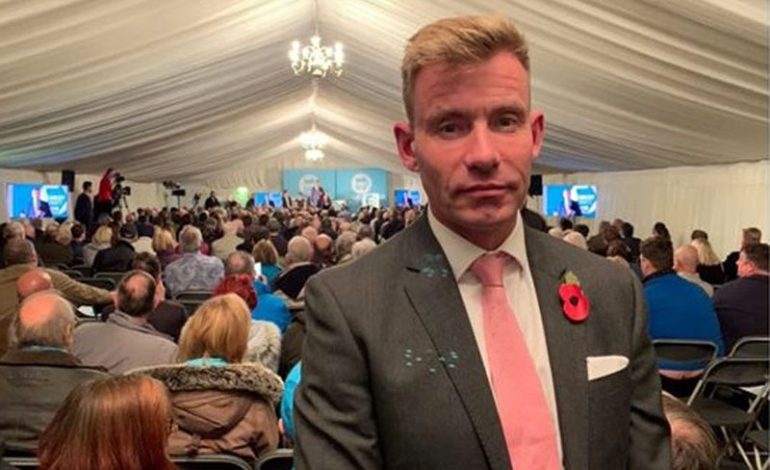 Nigel Farage has deployed one of his Brexit big-hitters to take on Phil Wilson for the Sedgefield seat in next month’s general election.

Londoner David Bull – currently a Brexit Party Member of the European Parliament for the North-West region – will bid to become Newton Aycliffe’s MP in the December 12 poll.

The 50-year-old defected from the Conservatives only this year to become an MEP for the Brexit Party, and was going to stand in the Central Suffolk and North Ipswich constituency until Farage revealed in Hartlepool this week that he wouldn’t contest Tory seats won in the last election.

So former Conservative parliamentary candidate Bull has instead been parachuted in by Farage to take on the Sedgefield constituency, which voted by 59% to Leave the EU in the 2016 referendum.

Dr Bull – pictured above during Farage’s media conference at Sedgefield Racecourse earlier this week – was selected in 2006 to represent the seat of Brighton Pavilion at the 2010 general election for the Conservative Party, but withdrew his candidacy in June 2009.

The broadcaster and businessman was one of 29 Brexit Party candidates elected to the European Parliament in the May 2019 elections.

“This is not about how you’ve voted tribally, it’s not about left and right,” said Dr Bull.

“It’s about right and wrong, and about which party will best represent you.”

Labour leader Jeremy Corbyn has claimed Farage’s move earlier this week is a deal with Tory leader Boris Johnson, and labelled it a “Trump pact”.

It was revealed earlier this week that local councillor Paul Howell has been selected by the Tories as their parliamentary candidate for the Sedgefield seat.

Mr Howell, who lives in Darlington, is currently a sitting councillor on both Durham County and Darlington Borough councils.

Phil Wilson has held the Sedgefield seat for the Labour Party since succeeding Tony Blair in 2007.

Mr Wilson had a majority of more than 6,000 in the 2017 general election, winning 22,200 votes to the Tory’s Dehenna Davison (who is now standing in Bishop Auckland) who won 16,100, and has won four consecutive general election campaigns.

The Lib Dems, the Green Party and an independent have now also thrown their hats into the ring to become the next MP for Sedgefield at the December 12 General Election.