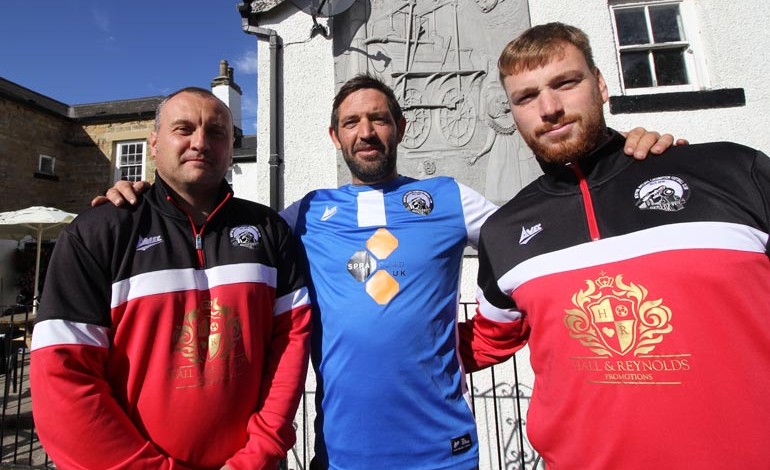 The former Aycliffe stars have teamed up with professional footballer Jason Steele after taking the Big Club Sunday side to the Locomotion pub on Aycliffe Business Park.

The club had to make the difficult decision of leaving Aycliffe Working Men’s Club after a long and successful 40-year spell, due to the retirement of key committee men Sid Thomas, Geoff Surtees, Trevor Mossop and Billy Dixon, who between them amassed an incredible 150 years’ service.

Former Aycliffe utility man Wood has taken on the role of chairman, at the tender age of 28, while ‘Magic Man’ Mellanby is the club’s new assistant manager.

The pair – pictured (above) with Loco landlord Keith Johnstone – were instrumental in Aycliffe’s rise through the non-league system in recent years, helping the club climb from park football to the Northern League first division.

Mellanby, who until recently enjoyed a successful spell as assistant manager at Northern League side Marske United, will bring much-needed experience to the dressing room.

Steele, the ex-Boro goalkeeper now with Blackburn Rovers, told Aycliffe Today: “Mark and Dan are known for their involvement with the town football club over the years and it’s great to have them both involved.

“Dan has a lot of experience at various levels of the game and he’s still registered as a player – in fact, he came off the bench to score last weekend!

“We’re currently top of the league having won five and drawn one from our first seven league games and we’re in the quarter-finals of a cup already, so it’s going really well.”

Steele says it was a difficult but necessary move from the Big Club to the Loco to ensure the Sunday side’s future.

The 26-year-old added: “It came to a crunch point in the summer when we had to make a decision.

“Dave Owen (former assistant manager) decided he wanted to take a step back in the summer along with four key committee men who all worked tirelessly to run the club, which we’re always grateful for.

“So it was a case of either letting the club fold, or some of the lads had to take on some responsibility to take on the running of it.

“Mark took on the chairman role and Will Swinburne took on the secretary job and, between them and Mark’s personal assistant Lisa Jones, they’re doing a fantastic job. They’ve taken on the challenge and they’re putting a lot of hours in around their full-time jobs to make things happen.

“We saw it as a fresh start so the decision was made to move to the Locomotion and everything is going well so far.”

The Locomotion have been supported by a number of sponsors over the summer, including Sprayclad UK of Bishop Auckland who have again sponsored their strips.

The club’s centre-back Daryll Hall and Alex Reynolds, of Hall & Reynolds Promotions, have sponsored the players’ tracksuits, while centre forward Sonny Andrews, who with his brother own the sandwich brand Fatso’s, has also chipped in.

Secretary Swinburne added: “We would like to thank the committee and members of the Big Club for their support over the years, especially those who bought digits every week.

“We’d also like to thank everyone who has been a player, committee member, manager and supporter over the years, and hope to have your continued support for the Loco!”

The Locomotion are still playing their home games at Woodham Academy on the town.

• Meanwhile, the club plays its first FA Sunday Cup fixture on Sunday October 16 (2pm kick-off) when they take on Dawdon Welfare at Seaham Red Star’s ground in Seaham (postcode SR7 0LW). A coach is leaving Aycliffe Sports Club at 12moon, returning at 7.30pm, costing £8 return – anyone interested in going along can contact the club on Facebook or Twitter.