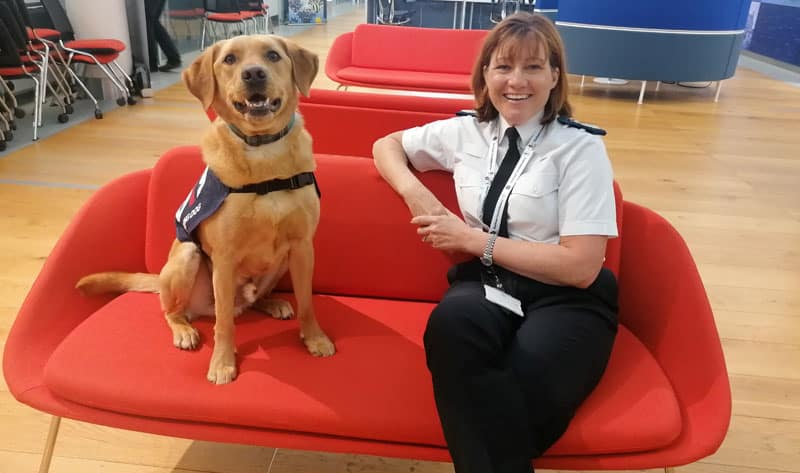 A new four-legged recruit has joined the Durham Constabulary family to help support officers and staff with their mental health.

Police officers and staff face many pressures in their demanding roles and can sometimes find themselves struggling with their mental health.

Ben – who is already one part of the force’s Ben and Jet duo – will be carrying out additional duties with Durham’s Wellbeing and Welfare Team to support the delivery of trauma focused sessions and post incident support across the organisation.

Alongside Ben’s handler, PCSO Claire Kerr, the pair will be available to any employee who may need signposting to other services available within the force.

The duo will also be paying visits to different teams throughout the force, especially those areas which deal with high harm or potentially traumatic incidents such as our Safeguarding teams.

And they will be available, Ben’s diary permitting, to attend Team shouts across the whole organisation.

CC Farrell said: “We all know that policing has both a physical but also psychological impact when we are seeing and dealing with harm and trauma on a regular basis so Ben is here to support our officers and staff.

“He’s an absolute delight and we are really proud in Durham that we are part of this initiative.”

Sergeant Garry Botterill, who is leading on the Wellbeing and Trauma Support Dogs Project, added: “By introducing trained support dogs and their handlers to frontline police officers and staff, it helps create an environment for conversations about their mental health and to highlight the relevant services which can provide help and support to those who need it.

“It’s incredibly important that people feel they can talk about their mental health, particularly in a job that presents people with challenging and traumatic situations.

“The dogs offer some light relief from the often difficult job we do, and anything that makes people feel positive and gets them talking should be encouraged.”

Durham Constabulary welfare manager Margaret Toward said: “The calming influence that the presence of a wellbeing dog can generate is proven and through interaction with Ben we seek to encourage colleagues to open up, engage and speak about mental health and wellbeing.”