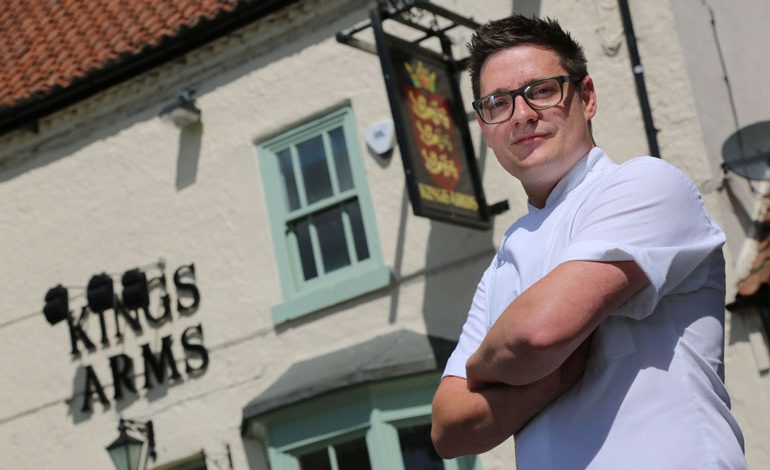 A County Durham chef who has worked for TV culinary star Gordon Ramsay will realise a long-held ambition of running his own restaurant when he re-opens a once popular village pub next month.

Paul Bussey has left his role as head chef of Acklam Hall in Middlesbrough to take on the King’s Arms in Great Stainton, on the outskirts of Newton Aycliffe.

The pub has been closed for around 10 months, but was recently acquired by local businessman John Wade, who also owns the County restaurant and Telegraph pub, both in Aycliffe Village.

A significant investment has been put into refurbishing the King’s Arms, which will re-open in the second half of August.

And chef Bussey, who’s originally from Chilton, can’t wait to get his new restaurant up and running.

The 32-year-old has gained inspiration throughout his cheffing history, starting at an early age when he spent time cooking with his mother and grandmother.

Bussey was just 18 when he left the North-East for London to work at The Connaught under the guidance of Angela Hartnett, a protégée of TV chef Gordon Ramsay.

Then came more experience as a sous-chef in Ramsay’s restaurant in the Hilton Dubai before a spell at The Star Inn at Harome.

Bussey said: “This opportunity came up, albeit out of the blue, and it’s something I’ve always wanted to do.

“If you don’t take the opportunity to do something for yourself, there’s every chance you will look back, five or 10 years down the line, and regret not giving it a go.

“I’d been told John Wade bought it and was in the process of refurbishing it, in preparation to re-open it as a restaurant, so I managed to get in touch with him.

“I just told him what I thought about its potential, and what I could do with it, and luckily John has been very supportive.”

Bussey has signed an initial five-year lease agreement for the King’s Arms, which will feel like a brand new restaurant once fully completed. Walls have been re-skimmed, while it will also benefit from new furniture and carpets, new decor and a brand new kitchen.

“There’s no reason it can’t be a destination eaterie like it was 15 years ago,” said Bussey.

“People used to travel from all over the North-East to come here, and I want to get it back to that. People will come out for good food at decent prices and really good service.”

Bussey was previously head chef at the highly-acclaimed Cleveland Tontine before he joined Acklam Hall – Middlesbrough’s only Grade I listed building which re-opened as a restaurant and conference centre in 2016 following a 12-month restoration programme.

He quickly helped the hall gain a reputation for top quality food – now he’s hoping to do the same with the King’s Arms.

Bussey’s new menus will include pub classics, daily specials and an a la carte option with some of his signature dishes, including the taste of the Yorkshire pig, crispy belly, fillet wrapped in pancetta and slow-braised cheek.

“Most diners can be put off by the really high-end, expensive dishes,” said Bussey. “But that’s not what I’m looking to do here – it will be good quality, traditional food with my own twist, and at reasonable prices.

“It’s an exciting new chapter for me and can’t wait to get it up and running.”