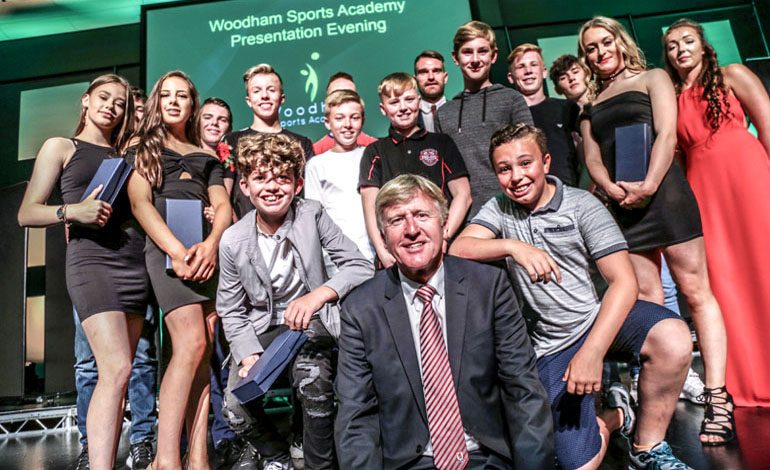 The former boss of one of England’s most successful football Academies has praised the work of a local school.

Dave Parnaby presented young people from Woodham Academy in Newton Aycliffe with a series of awards at the school’s annual Sports Academy presentation, held at the Xcel Centre on Aycliffe Business Park.

Click here to see our picture gallery of the presentation

During his time, Academy players recouped more than £75m in transfer fees, while more than 100 of them have gone on to play league football.

Parnaby was particularly impressed by the array of sports available to students at Woodham Academy during the presentation.

“The work that has gone on behind the scenes is outstanding,” he said.

“What I’ve been most impressed with is the variety of sports available to young people at Woodham Academy, and some fantastic opportunities.

“All credit to the school, the head teacher and all the coaches involved, it’s very impressive.”

Woodham Sports Academy was launched six years ago. Now, more than a third of the school’s students are signed up to it, participating in football, swimming, dancing, water polo, gymnastics, netball, mountain biking, handball, table tennis, cricket, boxing and basketball.

Parnaby added: “The figures are hugely impressive, and it’s easy to understand why those who are participating in sport and enjoying their time in school are achieving in their academic studies as well.

“But there are also basic principles I’ve always lived by, one of which is manners, having respect. During the presentation every one of them said ‘thank you’ which might sound small, but to me is very important.

“Your core values really come from your parents, and you could see from the turn-out here that parents are very supportive of what their children want to do.

“Woodham feels like a really good place to work and study.”

Hannah Kent, director of Woodham Sports Academy, added: “We’re all exceptionally proud of every single one of our students.

“They’re fantastic at everything they put their hands to, and they do it with such good character and attitude.

“Students in our Sports Academy also perform well academically. We encourage them through contracts, and they have to maintain certain standards throughout schools for them to remain in the Sports Academy, so they’re encouraged to achieve at everything they do, not just sport.

“We have 285 students in the Sports Academy, so deciding who wins the individual awards is an incredibly difficult one, because of the standards we have at Woodham.”