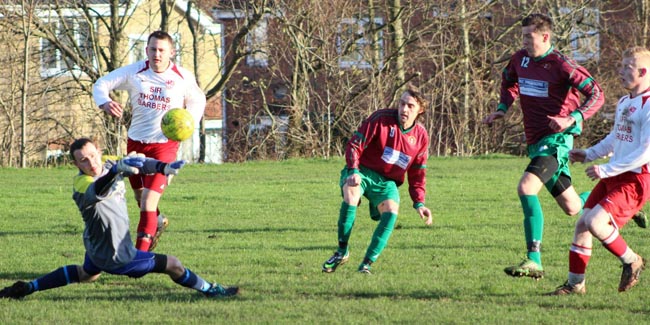 This weekend saw a break from league fixtures and a return to cup action for Newton Aycliffe Sports Club against Bishop Auckland Laceys.

Cup form has not been great so far this season, and this fixture in the Invitation Cup is one of only 2 cups left for the Sports Club to compete in. The opponents were familiar, as the two sides met in the league just a fortnight ago with the Aycliffe side narrowly beating the Bishop side 4-3.

This week, for the first time in a while, the Sports Club had almost a full quota of players to choose from, which made picking the starting 11 a difficult task for manager Paul Eales. One thing the he couldn’t change was the two centre forwards, Connor Hughes and Chris Jones, who are proving to be a formidable partnership. Another player who has been in superb form of late is Anth Campbell, and he opened the scoring on the 20 minute mark with a low drive from just outside the box leaving the keeper with no chance. With the heavy pitch taking its toll, both sides again found it hard to play neat football so the chances were few and far between in the first half.

However, the game opened up in the second half when Gareth Boyes pile driver somehow slipped through the keepers hands and into the back of the net to make it 2-0. Chris Jones opened his account shortly afterwards when Anth Campbell’s strike hit the bar and fell to the forward to slot home. Laceys clawed one back on the hour mark but it was Campbell again who put the away side 4-1 up and effectively killed off any chance of the hosts getting back into the game.

As the clocked ticked down into the final seconds, Chris Jones grabbed his second to make it 5-1 and secured the Aycliffes side passage into the next round.

Next up is a home league game, the first at Moore lane for some time, against one of the leading sides in the League, Willington Cottles. This will be last game before the Christmas break and the Sportsy will be looking to maintain this excellent run of form which has seen them win the last four games in a row.