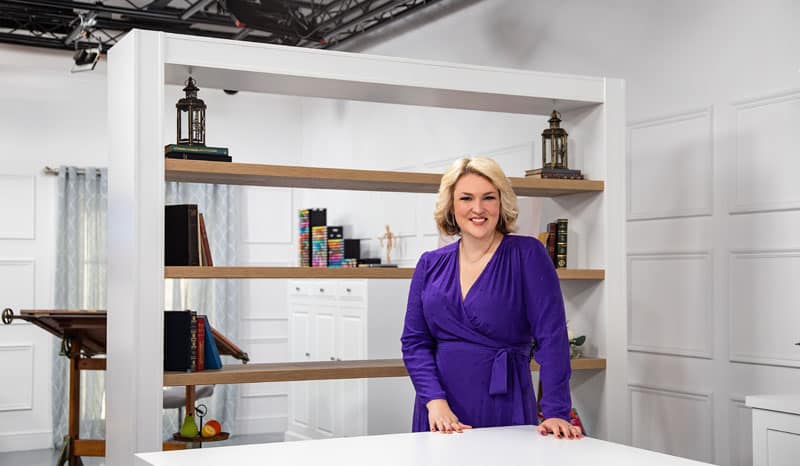 Crafter’s Companion is celebrating the unveiling of a brand new studio area for its global digital platform, Crafter’s TV.

With people spending more time at home this year, Crafter’s TV has seen a surge in demand for its service.

The platform’s international viewers have outgrown its UK viewers, with audiences tuning in from countries such as Germany, Australia, Canada and the United States.

The shows regularly experience viewers commenting at 3am in California, to after midnight in Australia.

The digital channel has created a bigger and better studio space than ever before, to meet the needs of its ever-growing online craft community.

Crafter’s TV recently celebrated its first anniversary, after bolstering its programme to seven days a week, with two live shows every day.

The platform has always held the unique position of being the only craft outlet to engage viewers 100 per cent of the time through live and constant conversation.

Now, with some creative features in the new studio, such as aspirational living environments, its talented team of on-air craft experts and presenters are set to take audience interaction to the next level, further immersing them into the live studio experience.

The shows themselves enable viewers to access special offers on crafting, art and sewing products and aim to inspire and educate customers with their purchases and things that they already have at home.

In addition to Crafter’s TV shows, the original studio has also been used to film for international partners, such as HSN in the US and QVC, allowing the business to continue showcasing its exciting products and launches at a time when travel has been prohibited.

Creative director and company founder, Sara Davies, said: “Crafter’s Companion has grown in a phenomenal way, since I established the company 15 years ago.

“Launching Crafter’s TV was a huge milestone for us last year and it has gone from strength to strength.

“Our new studio is a very important step on our journey to bring our family of crafters together and it has taken a tremendous amount of hard work to realise our vision.

“Creating the new studio has been a team effort for everyone at Crafter’s Companion and it is something for us to feel very proud of.”

Jeni Santillo, head of broadcast operations, said: “Our Crafter’s TV viewers have established a strong, supportive community, which this year is more important than ever.

“We are the only channel to have an ongoing conversation with our viewers throughout our shows, and that, coupled with the inspirational ideas, projects and advice that people have come to expect from Crafter’s TV, has enabled us to grow significantly throughout the last year.

“A new studio is the perfect thing to support that growth, as we develop and look to our plans for the future.”