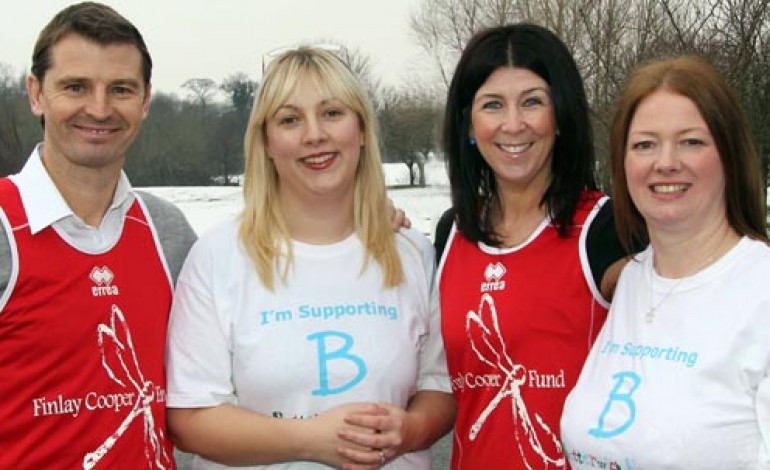 Boro legend and ex-Newtonian Colin Cooper and his wife Julie have underlined their longstanding support for two of Teesside’s most popular children’s charities with a £6,000 donation.

The Finlay Cooper Fund, named in memory of the cherished son they lost in a tragic choking accident, donated £3,000 each to Butterwick House Children’s Hospice and Zoe’s Place Baby Hospice.

The much-needed funds will help both Stockton-based Butterwick and Normanby-based Zoe’s Place continue to offer first class hospice facilities on the Teesside public.

Zoe’s Place and Butterwick Hospice have now shared £40,000 in donations from the Finlay Cooper Fund since the charity’s formation in 2006.

Colin and Julie used to live in Woodham Village, and after making the presentation, Julie said: “Zoe’s Place and Butterwick Children’s Hospice are both amazing places that offer a wonderful respite to local families.

“Whenever Colin and I visit, we always come away feeling lifted, which isn’t always what people would expect to feel from a hospice visit. They are both places filled with smiling faces and we are delighted to keep helping them both.

“The money we donated will be used for general upkeep of the hospices. In the present economic climate, simply keeping the doors open at these amazing facilities is more important than the sort of new equipment we have helped them buy in the past.”

Boro youth team coach Colin, who played more than 400 games for the club, added: “We would really like to thank all those people who have supported the Finlay Cooper Fund over the past six years. The contribution they make to the local area through generous donations needs to be applauded.

“Every single pound raised makes a huge difference to children in our immediate area and, of course, all of that money goes where it’s needed most.”

Rachel Willmore, community fundraiser for Zoe’s Place, said: “The support we’ve had from the Finlay Cooper Fund over many years has been amazing.

“The basic annual running costs of the hospice are £1 million and many of our funds have reduced in these difficult financial times, meaning that we are now having to close every other weekend. We therefore rely more than ever on the fundraising efforts of local businesses, individuals and charities like Finlay Cooper Fund.”

Victoria Rogers, event fundraiser for Butterwick, said: “These are much-needed funds that go towards being able to offer our day-to-day services for young children and their families free of charge. Those services include respite care, day care and end-of-life care, as well as much much-needed counseling services for siblings, parents and other close family members.”

Fundraising events by the Finlay Cooper Fund have included a recent sell-out dinner at Hardwick Hall starring ex-Boro stars Andy Townsend and Dean Windass, which raised £13,000, while thousands was raised by sponsored runners in both the Middlesbrough 5k Riverside Run and the SABIC Tees Pride 10k.

More than £9,000 was raised when fans of Boro and Millwall, another of Cooper’s former clubs, took part in an annual game in aid of the charity that starred Windass and the ex-defender, while fans bid up to £400 each to take part in a second charity game alongside former Riverside heroes George Boateng, Gaizka Mendieta, Alan Moore and Curtis Fleming.

● The Finlay Cooper Fund is looking for fundraisers to take part in the SABIC 5k Riverside Run on Sunday June 2 and the SABIC Tees Pride 10k on Sunday September 6. For more information, visit www.finlaycooperfund.co.uk