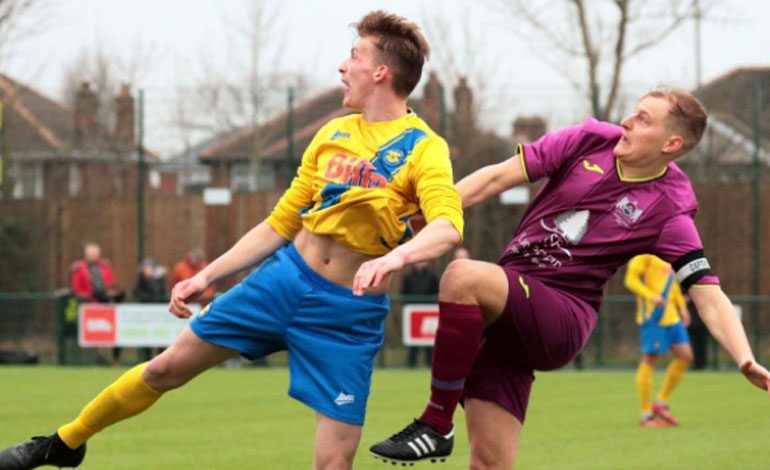 Newton Aycliffe travelled to FA Vase semi-finalists Stockton Town and came away from Teesside with a win and three points on Saturday.

Most Northern League games were postponed on the day, but this one went ahead on Stockton’s 3G pitch at Bishopton Road West.

The surface suited Aycliffe’s passing game and they got off to a great start on three minutes. Centre forward Craig Hutchinson was fouled 20 yards out. Thibault Charmey smashed the resulting free-kick past the wall into the net.

Stockton came straight back and Aycliffe keeper James Winter made a smart save from Hayes.

The home side equalised on nine minutes when a corner was headed back into the penalty box and Coleman headed in.

Aycliffe then had a good spell in the game. They worked a good move on the quarter hour which resulted in home keeper Arthur saving from Stuart Banks.

They then created a couple of half-chances in quick succession, as their inter-passing was giving the Stockton back four some problems.

Stockton worked a free-kick on the half hour which ended with Woodhouse curling his shot over the bar.

Aycliffe went ahead again on 34 minutes when another good passing move was finished by Ben Trotter, who drove the ball low into the corner for 1-2.

Again, Stockton came back at Aycliffe and Winter made a good save following a corner.

Aycliffe started the second half well and were unlucky when Charmey curled a shot just over the bar.

Both sides tried to prise an opening, and Stockton went close on 66 minutes when a good move ended with Winter making a fine save from Coleman’s header.

A minute later it was Aycliffe’s turn to go close as Banks dribbled past three defenders and got his shot away, only for Arthur to make a sharp save.

Stockton pressed hard for an equaliser and Hayes put two shots over the bar.

On 90 minutes Aycliffe man-of-the-match Winter made another save, this time from Owens. Aycliffe saw out injury time to gain an excellent win, which created some room between them and 17th-placed Bishop Auckland.

Aycliffe are scheduled to entertain Jarrow Roofing at Moore Lane on Tuesday night (March 13) followed by another home game on Saturday (March 17) against Whitley Bay.