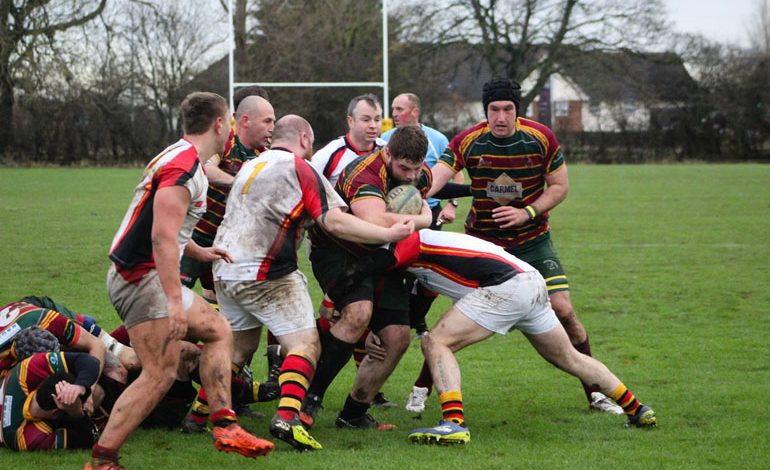 Newton Aycliffe’s first XV hosted Sunderland, in what was seen by many as a must-win to stop the decline Aycliffe had found themselves on of late.

The game started well, with both teams vying for possession, the first points of the game came when Aycliffe strayed offside in the backline five minutes in, giving Sunderland the chance to kick for posts.

The restart was well contested and Aycliffe fought hard in the midfield, before finding themselves pinned back in their own twenty two, and following a knock on from the home side, Sunderland’s blindside winger crossed following a strong scrummage.

Aycliffe responded swiftly, with a phase of play finishing with Chris Richards setting up James Thacker who cut through, converted by Gascoigne to take the home side within a point.

The home side reapplied the pressure from kick off, with good carries coming from the pack adding up to force the error from Sunderland, which Gascoigne safely converted into three points, taking Aycliffe into the lead.

Sunderland were next to strike, with a try coming from poor man-marking in the midfield, which left a gap which was exploited by the visitors backline, who crossed to take back the lead.

Aycliffe returned to the field with no changes, and looked set to break the habit of conceding a try directly after half time, and began an excellent attack, with forwards and backs working tight to the ruck to gain hard yards.

However, a turnover by Sunderland was kicked downfield, and allowed their rapid winger to race past the entire Aycliffe team, and the try was scored despite a valiant chase by Alfie Wilson and Andrew Littlefair, the kicker missed the conversion, leaving Aycliffe eight points behind.

Aycliffe knew they had to score next or the game would get away from them. Replacement scrum half Richie Brown drew the defence before releasing Jon McGuigan who forced his way to the line and crashed over, taking the scores to within three, the conversion just missed from out wide.

It was the visitors who would have the final say however, and following a period of sustained pressure, and a man down for a cynical pulling down of a maul, the Aycliffe defence could hold no longer, and Sunderland crossed, taking them eight points to the good with just minutes left to play.

Aycliffe fought their way down field, but were unable to cross.