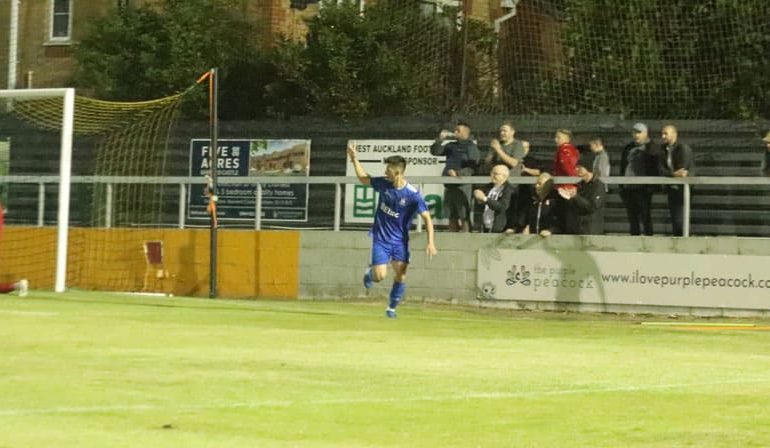 Andrei Ardelean scored his fourth goal in three games after quarter-of-an-hour before strike partner Adam Burnicle added a quickfire second for Colin Stromsoy’s side almost immediately from the restart.

Aycliffe looked set to see out the first half fairly comfortably before Corey Nicholson latched onto Gary Brown’s lofted ball to calmly fire beyond Adam Pickford and give West Auckland a route back into the game seven minutes before the interval.

But the hosts, who were perhaps fortunate not to be reduced to 10 men when Brown and Ardelean came together midway through the second half, were unable to find an equaliser against a resilient Aycliffe who put in a professional performance to earn their seventh win of the season.

Stromsoy made two changes to his starting XI who secured an impressive win over North Shields last weekend with Alexander Walker and Ethan Wood being replaced by Joe Ferguson and Burnicle.

Just under 500 spectators were inside the Wanted Stadium for this local derby but there was a slow start as both teams tried to figure one another out with Jake Petitjean’s ambitious effort nine minutes into the contest the first effort at goal.

A quick corner from Adam Mitchell almost caught Aycliffe out but Jordan Blinco was unable to scramble the ball over the line.

Minutes later and Blinco caught sight of goal again after gathering Liam Potter’s knock down but the former Sunderland man was off target.

But the deadlock was then broken by the visitors in the 15th minute when West goalkeeper Ross Cooombe’s mistimed clearance went as far as Nick Green who found Liam Jarvie on the left and his cross was a goalscorers dream finding Ardelean at the back post who slammed the ball into the roof of the net for his fourth of the season.

Within seconds of the restart Ardelean drew a foul from Brown which was taken quickly into the path of Aycliffe skipper Aaron Brown who flighted a ball into Burnicle and he was able to roll the challenge of Potter before coolly slotting home from an acute angle to double Aycliffe’s advantage.

Mitchell curled a freekick narrowly wide as Gary Forrest’s side looked for a way back into the game before Burnicle fired just wide capitalising on a sloppy clearance from Brown.

And it was Burnicle who brought out a fine stop from Coombe moments later when he fizzed in a left footed effort at the near post.

But with Aycliffe in the ascendency they were hit with a sucker punch somewhat against the run of play as Brown sent a long ball for Nicholson to chase and the pacy winger got there ahead of Green for a clear run on goal before slotting past Pickford to reduce the deficit.

And, much like Aycliffe, the home side almost grabbed a second immediately from the restart when Callum Munro saw his clearance charged down by David Dowson who then skewed wide of Pickford’s post.

The chances continued to come in the second half when Ferguson’s cross fell at the feet of Burnicle who saw his snapshot cleared from the line by Andre Bennett.

Jarvie tried his luck from the edge of the area before Brown fired high and wide for the hosts.

And Brown was the centre of attention a minute later when he was shown a yellow card by referee Alex Clark after catching Ardelean with a flailing arm – the 22-year-old had to receive lengthy treatment for a cut above the eye.

West Auckland’s best chance of an equaliser came in the 71st minute when Mitchell’s near post corner was met by Potter who got there ahead of Pickford but steered his header well over.

Instead it was Aycliffe who went closest when Ferguson’s in-swinging freekick was headed from the line by Brown with Coombe stranded before Petitjean’s freekick was met by Brown who brought out a save from the West stopper.

With seven minutes of stoppage time the home side threw caution to the wind in search of an unlikely equaliser as Stromsoy’s side almost grabbed a third but Petitjean just couldn’t get his angles right as he curled wide.

But the visitors wouldn’t need a third as they held on to secure a fourth successive win over West Auckland to move up to second in the table.