After last week’s win over The Royal British Legion, Newton Aycliffe Sports Club took to their travels to play fourth-placed Tomkins of Darlington, knowing a win would guarantee promotion to the 1st Division at their first attempt in this their very first season.

A delayed kick off added to the tension, but that did not deter the Aycliffe side from starting the more brightly of the two, dominating the early exchanges. A formation change to 4-1-3-2 saw the return of Paul Cook, playing in front of the back four and Connor Hughes returning after a season so far blighted with injury to the centre of midfield. Chris Jones was to be partnered with Glenn Hendrix up front also for the first time this season.

For all of the possession the Sports Club had, the Tomkins goalkeeper was never really challenged until a penalty was awarded after 10 minutes. Chris Jones stepped up and confidently slotted the ball home to make it 1-0 to the visitors.

The Aycliffe side remained on top and the new strike partnership was developing well with good interaction between the pair. Hendrix took up the role of playing the wider of the two and gave the home sides left back a tough job, struggling to mark him with good movement, strength and pace from the centre forward.

The second goal came on the half hour mark, good link up play again between the front two which saw Jones flick over the head of the defender for Hendrix to chase in a drill home the second.

The second half was to be a more even affair with the home side now digging deep to try and stop the Sports Clubs march to the top flight. Sloppy defending caught the Sports Club out and the home side took advantage to give them a chance of a comeback and they scored on 55 minutes to make it 1-2 and a chance to get back in the game.

However, the Aycliffe side responded quickly and Glenn Hendrix netted his brace on the hour mark to regain the two goal advantage. 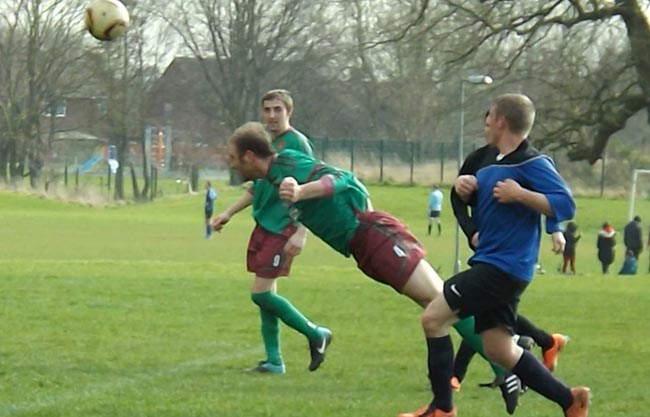 The Sports Club now had fresh worries with both Ryan Stonehouse and Mark Craggs pulling up with Hamstring problems, and Gareth Boyes also struggling with a similar problem – so a couple of quick changes were made, Anth Campbell coming on for Stonehouse and David Teder slotting into an unfamiliar role of Centre Half as cover for Mark Craggs – with Gareth Boyes deciding to stay on the pitch and help to steady the ship.

Tomkins took advantage of the changes made and powered through to make it 2-3, but with time quickly running out NASC FC managed to hold on for the win and gain promotion at the first attempt in the Darlington Sunday Invitational League.

Congratulations to the entire squad for their participation so far this season and with the League Title and the League Cup still up for grabs, there’s still plenty to play for this season.

Next Game: Away to Blackwell Meadows – Sunday 16th March.