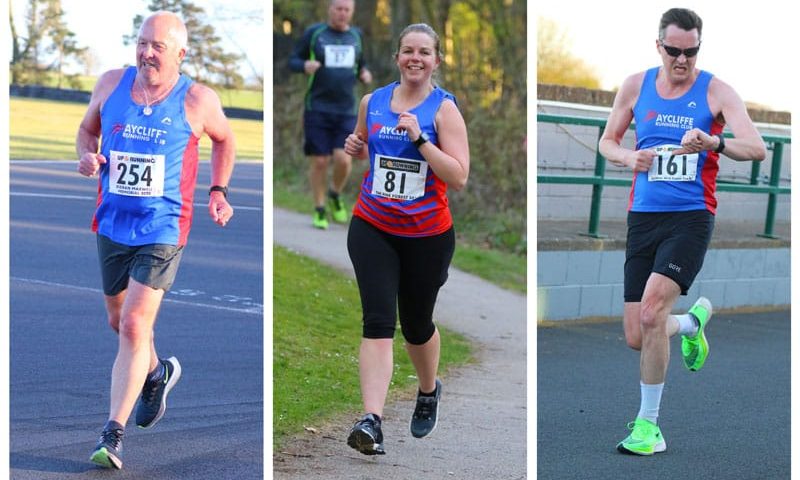 A busy week of racing started on Wednesday, April 21, as several members travelled the Croft Motor Circuit to participate in a pair of races hosted by the Darlington Harriers and Athletics Club.

In the Croft 5K, Rob Nicholson’s recent hard work paid off as he completed the race in 29:58.

In the Pitstop 10K, John Firby continued his recent good form finishing in a new personal best of 35:31.

He was followed home for the Club by Andy Talbot, who crossed the line in 39:55.

Andy finished first in his age category and, in doing so, set a new club record for the 10K distance in the VM60 age category.

Robert Young (below) was the next runner home for the club, and Robert also beat his previous best for the distance, crossing the line in 40:18.

In a good showing following several injuries, Stuart Joyce wasn’t far behind in a time of 41:36.

Julie Nisbet was our first lady home, recording a huge personal best of 46:52. Angela Sutheran came in next in a time of 48:31, with Sandra Rudd completing the course in a time of 1:09.24, finishing first in her age category.

Paul Dalton headed to Matfen on Sunday, April 25, to participate in the undulating Run Northumberland BIG 10 Miler and completed the race in 63:22. At the same time, Carley Cooper was taking part in the Washington Trail 10K, hosted by the Trail Outlaws. Carley completed the race in 1:04.48.

In the 100m, Elizabeth Clay completed her run in 14:90, finishing second in her age category, with Courtney Bowes just behind in 15:50.

In the Long Jump, Elizabeth Clay posted a distance of 3.23m, and she was followed by Courtney Bowes (3.09m), Hannah Brischuk (1.94m), Rose Taylor (1.59m) and Elijah McLuckie (1.48m), with Elizabeth and Courtney finishing second and third in their age category.

Not to be outdone, the senior section had three members participating in the Mile event. In Heat 2, Andy Talbot completed his run in 5:47.6, recording the fastest time in his age category (VM60) on the day. At the time of going to print, this is also the leading time over the Mile in the UK for a VM60 in 2021.