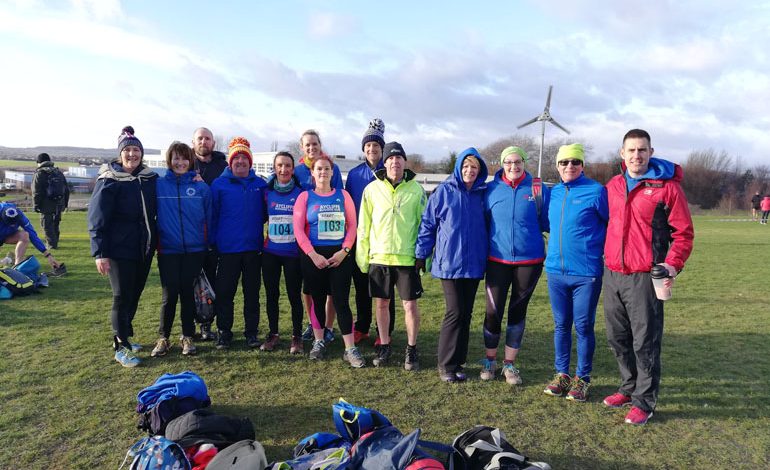 It was another full weekend of racing this week which as always began on the Saturday with numerous members taking place in Parkruns.

This saw two of our members record PB’s both at the event in Hackworth Park, Shildon. John Richardson completed this in 26.37 and Tracey Pickering in 32.48.

On Sunday it was the return of the cross country fixtures following the Christmas break. This event was the Cathedral Relays. These are usually hosted by and held at Durham.

However, this year, Birtley AC took over this race and the race was held at the Lord Lawson School.

The weather wasn’t in the runners favour however with the conditions really windy. If that wasn’t bad enough the course was set out with 4 short sharp hills in to make the runners work extra hard in the wind.

ARC had seven teams entered in total. Four male teams and three female teams each with three runners with each runner covering a distance of 3k.

In the men’s race first team home were Andy Talbot, Richard Holland and Richard Campbell with a combined time of 37.27. They were followed by Rob Nicholson John Burnside and Trevor Needham in 45.14, Lee Wren, David Stothard and Ian Baronowski in 45.40 and John Heywood, Anne Kellett and James Wilson in 49.16.

In the ladies race first home was Sue Milburn, Cyd Denise and Julie Nisbet in 46.28, followed by Lindsey Brown, Jane Burnside and Gemma Holland in 54.35 and Anne Kellett, Melanie Rowland and Susan Clark in 55.15.

Elsewhere three of our members took part in the Tees Trail Race at Wynyard. This was a 5k race which utilises the old railway line at Wynyard and also requires the runners to climb a steep section of steps very close to the end. First home for Aycliffe was Dave Blewitt in a time of 24.04. He was followed by Michelle Scott in 24.29 and John Richardson in 27.50.

Finally on Sunday Mark Bainbridge travelled to York to take place in the Brass Monkey half marathon. This is a really popular half marathon race which starts and finishes at York Racecourse. Mark completed this in 1.37.52 achieving a PB.