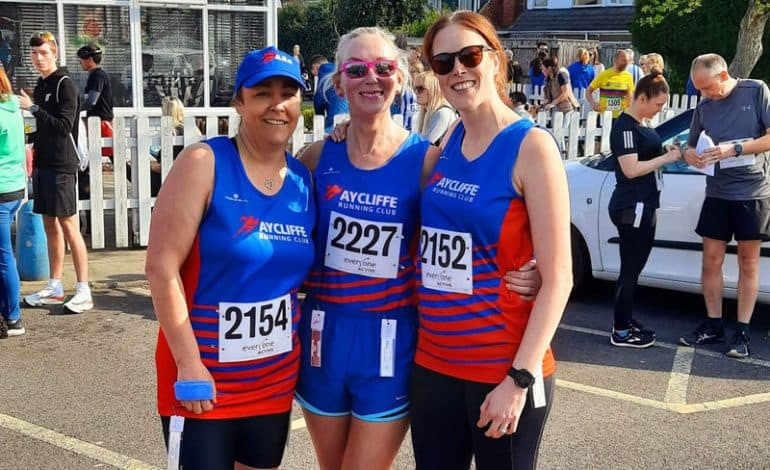 We start this week’s report at the Children with Cancer 5K Fun Run, which was hosted by the Darlington Harriers and Athletics Club at the South Park in Darlington on Wednesday, April 13.

David Stothard was the first runner home for the club at the run, finishing in 27:10, and he was followed home by brother, Ian Stothard, who completed the race in 34:25.

Championship Points were up for grabs at the Mermaid 10K on Good Friday.

The race, which starts behind The Mermaid Pub in Marske, is a popular one with local runners, and comprises one loop of the local housing estate before heading down to the seafront.

First across the line for the club was John Firby, who registered a new Personal Best (PB) of 34:55 for the distance.

Dez Fielden continued his recent excellent form, finishing in 35:46, claiming third spot in the M50+ age category, and improving his own club record in the M50-54 age category.

Gareth Kyle had a strong run, dipping under the 37-minute barrier for the first time, completing the race in 36:56.

Paul Dalton and Stuart Joyce ran together, with Paul crossing the line in 39:09 and Stuart finishing in 39:13, smashing his previous 10K best. Stuart’s run was also good enough to claim third place in the M55+ age category on the day.

Andy Talbot claimed second place in the M60+ age category, finishing the race in 40:10, with Rob Young not too far behind in 40:54.

Angela Sutheran was our first female finisher, completing her run in 47:50 (PB).

On Saturday morning, 22 members started their weekend with a parkrun, with representatives of the club turning out at the Concord (Sheffield), Darlington South Park, Hackworth, Sedgefield, Silksworth and Town Moor 5K events.

On Sunday, the Darlington Trail Series hosted their Easter Fun Run 5K in the South Park in Darlington, in order to raise funds for St. Teresa’s Hospice. Unfortunately, at the time of going to print, the results had not been published.

Ian Stothard competed in the 5K race, crossing the line in 35:11, and in doing so finished third in the M50-54 age category.

Several members took on the 10K race, with Shaun Dodds first home for the club in 51:10.

Shaun was followed home by Kevin Tatham, who finished in 52:13, and in doing so finished first in the M55-59 age category.

Finally, the club were proud to be represented at one of the most iconic races in the World on Monday, as Trevor Dixon took on the Boston Marathon (the one in the USA, not Lincolnshire!). Trevor had a fantastic run, dipping under the three-hour mark, completing the race in 2:59:24.