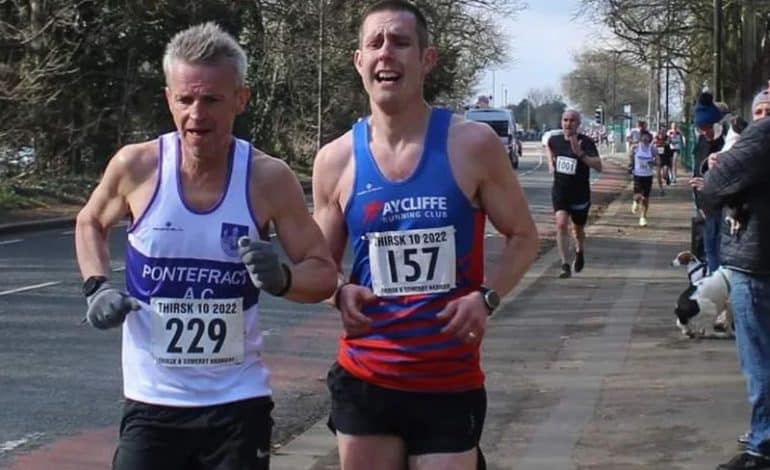 The weekend began on Saturday morning with our second parkrun ‘takeover’ event, this time at Hackworth parkrun in Shildon.

Members of the club took on all the volunteer roles on the day, once again giving something back to the local running community, and in addition provided cake for the runner’s afterwards in recognition of Hackworth parkrun’s ninth birthday.

There was just one Personal Best (PB) recorded this weekend, as Peter Jarps beat his previous best time for the Sedgefield event, finishing in 23:22.

The big race of the weekend was held on Sunday morning, as several Members headed to North Yorkshire to take part in the Thirsk 10.

The race, which starts and finishes at Thirsk Racecourse, takes place on an undulating loop, with a little out and back dog-leg section.

Conditions on the day were slightly windy, however that did not stop some Members recording new best times for the 10 Mile distance.

John Surtees was the first runner home for the club, finishing in 57:55, and he was closely followed by John Firby, who crossed the line in 58:08 (PB).

Richard Campbell had a strong run, taking over two minutes off his previous best 10 Mile time, finishing in 62:23 (PB).

Tracey Surtees was the first female Aycliffe runner home, finishing in a very creditable 69:16, with Angela Sutheran crossing the line in 80:21.

Trish Kay established a new club record in the F60 age category, as she finished in 86:27.

David Stothard was our next runner home, crossing the line in 1:33:04, and he was closely followed by Jayne Rudd, who recorded her second Personal Best over the 10 Mile distance in as many weeks, finishing in 1:35:51 (PB).

Elsewhere on Sunday morning, Gareth Kyle was representing the Club at the MBNA Chester 10K. Gareth continued his recent excellent form, finishing the race in 37:44.

If you have any queries about the activities of Aycliffe Running Club, or are interested in joining the club, visit ayclifferunningclub.org.uk, or contact the club’s secretary, Donna, at [email protected]ail.com.