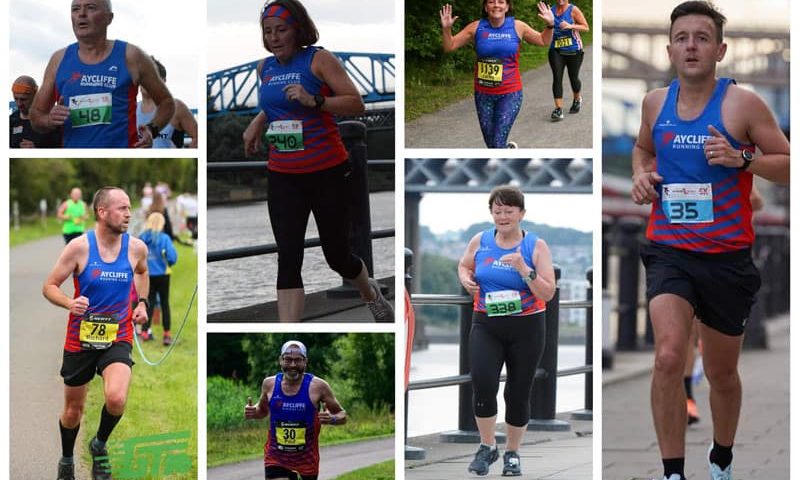 We start this week with the Quayside 5K, which took place on Wednesday, August 11, on the banks of the River Tyne.

The race is an out and back along the quayside, with the last few metres taking runners across Millennium Bridge to the finishing line in Baltic Square.

First home for the club was John Surtees in a time of 17:39. Trevor Needham was next to cross the line in 21:34, which was good enough for Trevor to claim third place in his Age Category (VM65) on the night.

Shaun Dodds completed the race in 23:58, and Carley Cooper started what was to be a busy race week for her with a time of 26:13. Jan McLuckie was the last of the Aycliffe finishers in a time of 35:24.

Most parkrun events are up and running again and 39 members started their Saturday with a parkrun this week.

The most popular parkrun for our members was at Hackworth Park in Shildon, which was celebrating its 350th event this weekend, however the club was also represented at parkruns at Darlington South Park, Sedgefield, Fountains Abbey, York, Penrith and Edinburgh.

Meanwhile, over at Sedgefield parkrun, Eve Doe continued her recent improvement, setting herself a new PB for that event (31:37).

Later on Saturday morning, several members turned out at the Gateshead Trail 10K, which started at Blaydon Rugby Club, and took in the undulating paths and woodland trails alongside the River Derwent, and through the Derwenthaugh Country Park.

First home for the club was Paul Dalton in 38:58. Richard Holland crossed the line in 46:43, and he was followed in by Carley Cooper (57:59), who was completing her second race of the week. Nicola Ingman was the final runner home in a time of 66:40.

On Sunday, August 15, Carley Cooper took on her third race of the week, participating in the Trail Outlaws’ Branches and Bays 10K, which seemed to offer runners a little more than the stipulated distance.

Starting in the local village of Hawthorn, the route takes you through the Durham Wildlife Trust and National Trust managed woodland of Hawthorn Dene, followed by the bays of Hawthorn Hive and the Blast Beach. Carley completed her run in 1:33:19.

At the same time on Sunday, David Stothard was taking on the North-East Project Run 10 Miler, which took place in Thornaby. Unfortunately, the results had not been released at the time of publishing, so we hope to bring David’s result to you at a future date.

Finally, on Monday, August 16, two members headed to Monkton Stadium in Jarrow to take on the 800m, which was being run as part of the latest North-East Masters Athletics Association (NEMAA) Track and Field League Match (Match 6).

In Heat 8, John Surtees completed the race in 2:12.0, which was good enough to place him first in his age category (VM35) on the night and also set a new club record in the same age category.