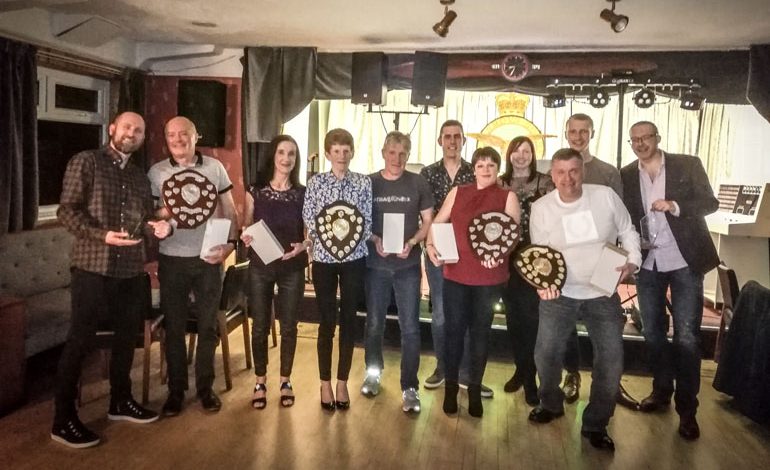 This week’s report isn’t so much of a race report rather a club report.

There was unusually no racing this weekend but there were two PB’s achieved at Shildon Parkrun. Well done to Richard Holland for PB of 20.22 and John Richardson in 25.18. A further PB was obtained by Carly Gibson at Chester le Street in 27.55.

This week’s focus was on the Club’s Presentation Night held at the RAFA club in Newton Aycliffe where awards were presented for individuals achievements throughout the past year.

The awards were as follows:

Club Handicap – this is a three-mile loop in Newton Aycliffe along the old lines where runners start at different times dependant on their most recent 5k start times. The female winner was Gemma Holland and the male winner Paul Dalton.

Next up was the Club Championship. For this there are a selection of races picked by the club and any member who takes part in each particular race can achieve points based on age grading. The female winner of this was Susan Clark and male winner was Dave Blewitt.

An award was then given for the best newcomer. Winner of this was mark Bainbridge who despite an injury that stopped him running for a good few months, he was able to achieve numerous PB’s throughout the year.

The next award was most improved. The winner of this was Sam Baronowski who improved greatly through the year progressing to completion of several 10ks and achieving several PB’s.

The award for female athlete of the year went to Trish Kay. Trish competed in a lot of races last year and managed to keep very consistent with her times and often placed in the top 3 in her age range.

Male athlete of the year went to Ian Baronowski. Ian again completed in a lot of races and obtained PB’s in several distances. His biggest achievement was taking over 16 minutes off his time (from the previous year) for the Dentdale 14mile race.

The next awards were given out for the Cross Country Athletes of the year. The female winner was Michelle Jane who had a great season in 2017/2018. Michelle won bronze medal overall in her category in the NYSD league.

The male award went to Richard Campbell who participated in almost every race in both the NYSD and Harrier Leagues often first home for the club in that season.

The final award of the night ‘The Rob Nven Award’ went to Trevor Needham. There is a wider scope for this award and is usually presented to someone who has made a considerable contribution to the club. Trevor was awarded this because of his significant work behind the scenes as Race Director for our own 10k race. A lot of work is required to keep this successful race growing in strength.

Well done to all our winners and to all our members who continue to make the club the success that it is.

For anyone interested in joining the club, you can simply turn up at one of our sessions all of which start from the Oakleaf Complex.