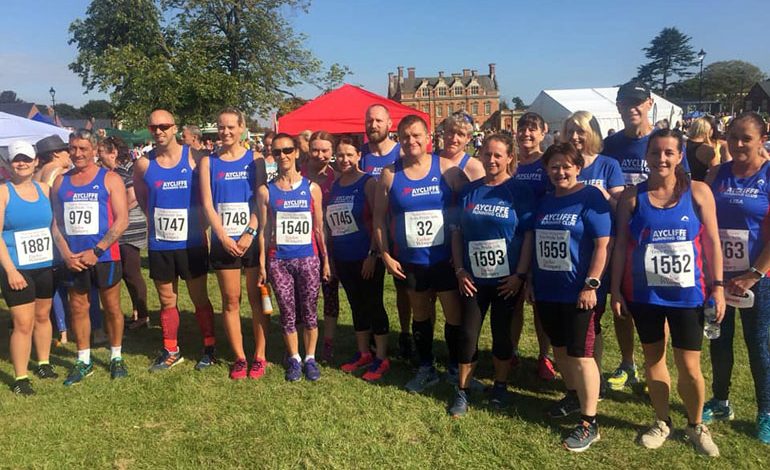 It was back to business for the runners of Aycliffe Running Club this week after what was a quieter week previously.

Racing commenced last Thursday with 20 members taking part in the Tom Wall Relays at Stewart Park in Middlesbrough (below).

These relays are 4 x 1 mile and ARC had 5 full teams entered. The first team back for ARC was a mixed team of John Surtees, Ricvhard Holland, Tracey Surtees and Richard Campbell in 22.26 and they were 2nd in the mixed team category.

Next back were Dave Blewitt, Andy Talbot, Trevor Needham and Peter Smith in 24.56 and they competed in the Male Vets category.

They were followed by another Male Vets team of Alex Lineton, Rob Nicholson, John Burnside and Alan Kellett in 27.59. Next back was another mixed team of John Heywood, Gemma Holland, Julie Nisbet and Michelle Zamir in 28.32. Last but not least was the final Vet Female team of Anne Kellett, Susan Clark, Mandy Heywood and Bev Phillippo in 34.09.

It has to be said that there were some really good personal times (PB’s achieved) and some club records broken.

On the same night there was 5 mile race in South Park, Darlington. Angela Sutheran took part in this race, as support and pacer for her friend and completed this in 55.56.

The final race of the weeks was the Tees Price 10k in Middlesbrough. This is a really popular 10k with over 2,000 entries.

ARC had a really good amount of runners enter this race (some of them are pictured top) which is popular every year with the club.