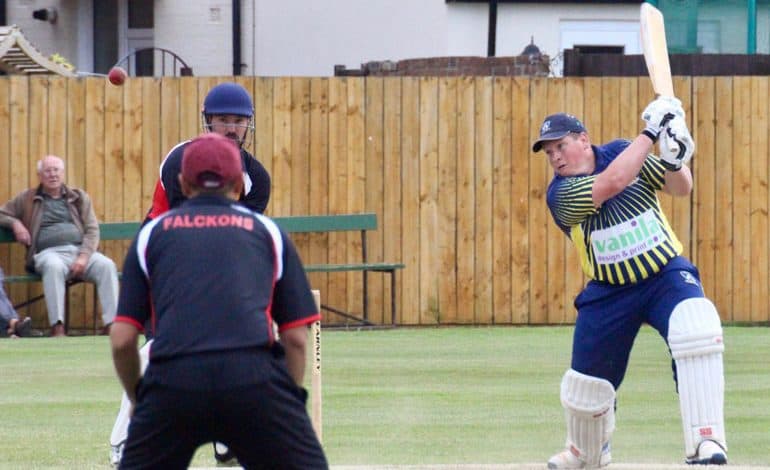 Newton Aycliffe Cricket Club (sponsored by Vanila Design and Print) reached the final of the Brunton Cup after a comprehensive victory over Norton.

Having lost the toss and being asked to bat Aycliffe were immediately on the font foot with big hitting Darryn Bancroft and Michael Howe taking the game to the bowling attack.

When Michael Howe was first player out, Aycliffe were already 22 off only two overs.

Darryn Bancroft fell shortly after but Aycliffe continued to attack with Sam Telford (29 runs off 20 balls) and man-of-the-match Chris Palmer (47 runs off 40 balls, pictured above) adding a further quick fire 41 before Sam fell, caught going for another attacking shot.

After Dan Craggs was out cheaply, Chris was joined by Adam Gittins and the pair added a further 67 before they were both out in the last over, taking Aycliffe to a formidable 147 from six off their 20 overs.

In truth Norton never looked like chasing the total down, losing wickets at regular intervals and at the half-way stage they still needed a further 102 runs.

Patrick Howe finished with three wickets for only 11 runs from his four overs, with every Aycliffe bowler playing their part in restricting Norton to just 93 for eight from their 20 overs, 54 runs short of Aycliffe’s score.

Having already beaten two higher ranked teams, if Aycliffe are to lift the trophy they will have to do it the hard way as they face another team from a higher division when they travel to Marton CC on Friday (June 22) to face Saltburn, 6pm start.

However with the club playing well in all competitions this season they are confident that they can cause another upset and bring one of the major NYSD trophies back to Aycliffe.